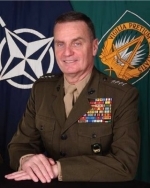 The Ukraine crisis brought European energy security back into the spotlight. Previous hopes that energy interdependence would help stabilize and improve EU-Russian relations have proven to be illusory. A resurgent Russia continues to use energy as a weapon in its increasingly belligerent foreign policy. This is a challenge not only to Europe but to the transatlantic alliance as a whole. General Jones discussed European energy security challenges and the steps the United States, Poland and, more broadly, Europe can take to ensure that energy policies on both sides of the Atlantic are optimized to best serve the economic and security interests of the transatlantic community as a whole.