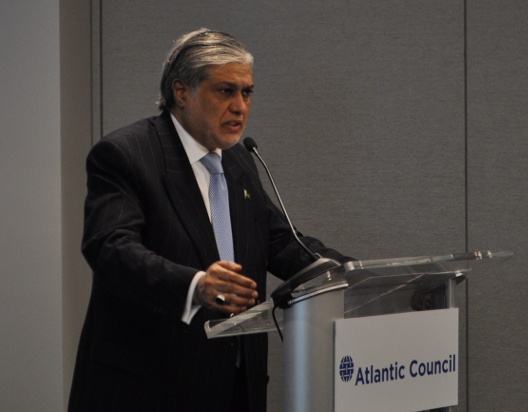 Mr. Dar discussed a number of issues, including the ongoing energy crisis, potential improvement in trade relations with India, and the recent loan from the International Monetary Fund. While Mr. Dar acknowledged the economic problems in Pakistan, he focused on the steps the Sharif government has taken to address these issues, and positive economic indicators, like the 100 percent increase in foreign direct investment. Some of the recent reforms undertaken are implementing austerity measures and introducing new taxes aimed at bringing more individuals into the tax net.

Overall, Mr. Dar painted a positive optimistic picture of the future of Pakistan’s economy. He reminded the audience that the Sharif government has only been in power for a few months, and reforms take time. While reforms may be difficult, Mr. Dar believes Pakistan is on the right path.