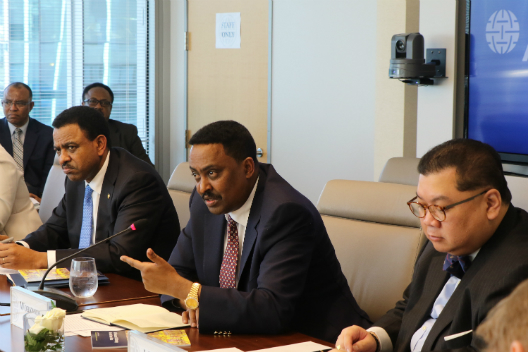 In his remarks, Dr. Workneh gave an overview of Ethiopia’s foreign policy in a regional context, including the country’s role in the South Sudan peace process via the Intergovernmental Authority on Development. He then gave an update on the political situation in Ethiopia, remarking on the government’s agreement—amid massive popular pressure—to make substantial political reforms and allow for more inclusive, democratic governance.

A discussion followed the Minister’s remarks, in which participants pressed Dr. Workneh on Ethiopia’s governance and political challenges. He reiterated the historical uniqueness of a voluntary leadership transition, and suggested that the process to select a new prime minister would be a timely one. He also promised that Ethiopian authorities would review some of the legislation that has drawn criticism from the international community for its negative impact on civil society activities.

From his role as a leading mediator of the High-Level Revitalization Forum for the Resolution of the Conflict in South Sudan, he observed that the international community is frustrated and “angry” about the impasse in South Sudan, and noted that the recent US arms embargo on South Sudan sent a very strong signal.

Dr. Workneh noted that Ethiopia intended to work closely with Sudan and Egypt to settle the timeline for filling the Grand Ethiopian Renaissance Dam, which will provide much-needed hydropower to Ethiopia and the broader region. Lastly, he remarked on the spillover effects from the Gulf crisis in the Horn of Africa, declaring that Ethiopia remained neutral amid the diplomatic dispute.

Accompanying the foreign minister to the Atlantic Council were Ambassador of Ethiopia to the United States H.E. Kassa Tekleberhan, Director General for American Affairs at the Foreign Ministry Amb. Birtukan Ayano, as well as other officials. Also in attendance and participating in the discussion were a number of current and former US government officials, business leaders, and numerous representatives of human rights and advocacy organizations.