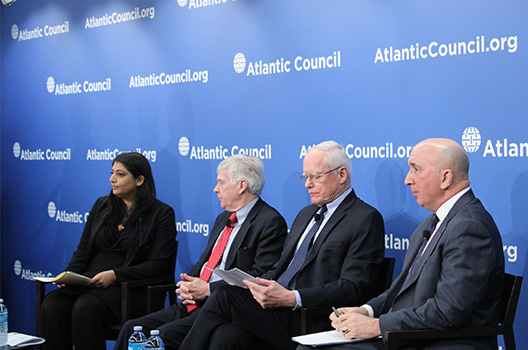 On February 16, 2016, the Rafik Hariri Center for the Middle East hosted a public launch of the Task Force on the Future of Iraq, comprising twenty-five members chaired by Ambassador Ryan Crocker. The aim of the Task Force is to present a coherent, long-term Iraq policy to the incoming US administration that tackles the underlying drivers of instability in the country. At the launch, Dr. Nussaibah Younis moderated a discussion with Ambassador Ryan Crocker, Ambassador James Jeffrey, and Lieutenant General Michael Barbero. Governor Jon Huntsman gave opening remarks.

Ambassador Crocker discussed the US military surge in Iraq in 2007 and 2008, as well as the ensuing period of relative security and stability across the country. Eventually “security [triggered] a political process” and for a time Iraq enjoyed not only a relatively stable security condition, but also a political process that attempted to bridge the wide gaps between various communities in the country.

General Barbero discussed the issue of Popular Military Forces (PMFs) and the Iraqi government’s experience in dealing with militias including integrating them into interior ministry and security forces. Barbero made the distinction between nationalist militias and Iranian surrogate militias, saying that the nationalist militias, those he deemed the “reconcilables,” can be brought back into the fold and integrated, while the Iranian surrogate militias, or the “irreconcilables,” cannot and must be dealt with separately.

The panel also discussed Iran, its goals, and its widening influence in Iraq. Ambassador Jeffrey said the strengthening Iran-Syria-Russia axis is the top regional problem and that Iran is trying to establish a regional power position, uniting all of the region’s Shia population. Ambassador Crocker added that the Islamic State (ISIS or ISIL) is beneficial for Iran and vice versa, as both of these actors are using the existence of the other to advance their respective goals. General Barbero added that whatever the future strategy is for Iraq, it needs to include Iran, even when Iran’s interests are not aligned with those of the United States.

View the webcast below: