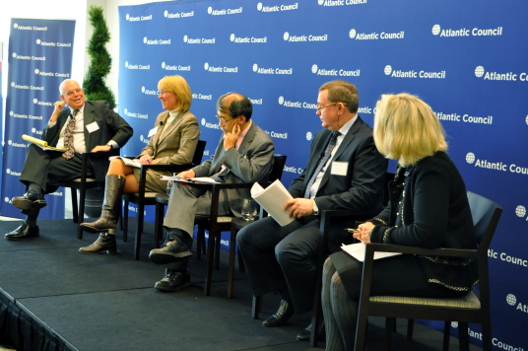 In the first event of the joint Brent Scowcroft Center on International Security and Energy and Environment Program‘s Geopolitics Initiative, this event engaged senior US, Russian, Asian, and European experts in a strategic conversation on multilateral cooperation on the broad issues of energy for the Asia-Pacific region, including sources of supply; climate change impacts on the food, water, energy nexus; and energy trade and maritime route security.

Panel II: Climate Change Impacts on Food, Water, and Energy in the Asia Pacific
This panel highlighted to important and related opportunities in addressing climate change impacts on food, water, and energy: modeling and insurance. Climate change models show that we need to adapt to future changes. In developing countries, such as China, demand will increase and developing sustainable sources of food, water, and energy are necessary in the long-term. Today, there is a climate resilience gap and assets are not prepared. Insurance has the capacity to facilitate the necessary resilience in existing social structures to assist in adaptation to climate change.

Panel III: Securing and Developing Trade and Maritime Routes
The final panel centered on the theme of cooperation versus confrontation in the Asia Pacific regarding trade and maritime routes. Various factors favor confrontation in the future such as resource competition, regional politics, and maritime border disputes. Furthermore, despite some increase in the use of Arctic passages, the Arctic is not yet a principle transit route. Therefore, the Asia Pacific energy supply chain is largely reliant Pacific maritime routes.