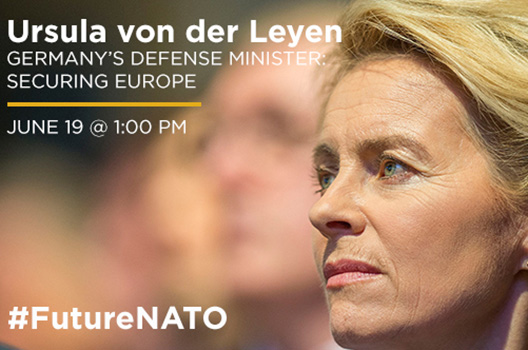 WASHINGTON – Germany’s Federal Minister of Defense Ursula von der Leyen affirmed today that Germany is committed to helping solve the challenges in Europe’s East and beyond alongside its transatlantic partners and the country will “rethink” its arms sales to Russia.


“Given the current events and crises, which are likely to increase rather than decrease in the future, for Germany, indifference is not an option,” she said at an Atlantic Council event today. “We want to become involved, conscious of our international responsibility, never unilateral but with our partners and allies, and using all instruments that are available to us… We cannot close our eyes to the fact that Russia is trampling, literally trampling, on international treaties.”

She stated that military force is presently not on the table: “Our choice of means bears our own hallmarks; it does not follow the logic of the Kremlin. There is no military option for the West or NATO in Ukraine.”

On the question of Europe continuing to sell arms to Russia, Dr. von der Leyen said: “I am aware of the fact that the possibility of selling weapons to Russia is being rethought and in Germany whenever you talk about selling armament to other countries, each and every time you have to look at the situation and measure the risks.”

Dr. von der Leyen spoke about the nature, meaning, and purpose of transatlantic relations and Germany’s role in the context of the new global order.

“In the face of the Russia-Ukraine crisis, the comprehensive approach takes on completely new dimensions… We want to increase our commitment based on transatlantic values, because we know that a peaceful and free future essentially depends on whether we can convince others of these values or not.”

She conceded that the transatlantic alliance is “not free of tension,” citing the National Security Administration scandal. She added that Europe must “urgently catch up in terms of technological capabilities… to protect ourselves and to organize our communication independently.”