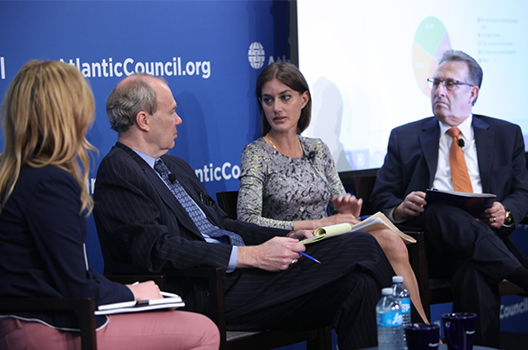 In the four years since the National Intelligence Council’s Global Trends 2030 was published, the biggest change in the world is the increased risk of major conflict. In 2012, a large-scale US/NATO conflict with Russia or China was close to unthinkable. Now, the post-Cold War security order has broken down, and the consequences are immense, potentially threatening globalization itself.

In Global Risks 2035: The Search for a New Normal, Mathew Burrows, director of the Atlantic Council’s Strategic Foresight Initiative and author of Global Trends 2030, analyzes geopolitical and technological trends to present five alternative futures based on how well global actors may respond, react, and adapt to growing uncertainty and change. Featuring a foreword by former National Security Advisor Brent Scowcroft, Global Risks 2035 provides the strategic foresight for the next administration to understand and prepare for the challenges of the future.

Following opening remarks from Atlantic Council President and CEO Fred Kempe, a panel discussed the highlights of Burrows’ report and then responded to questions from the audience. The event featured a viewing of the #Lifein2035 video and the panel’s discussion was guided by the audience’s responses to a survey about what life will look like in 2035. Throughout the conversation, a wordcloud was populated by the audience’s electronic submissions about what important risks they thought should be considered in the conversation. The panel consisted of report author Mathew Burrows, Millennium Leadership Fellow Samantha Vinograd, Former US Ambassador to Mexico and Argentina Earl Anthony Wayne, and Director of Communications for 1776 Erin McPike.