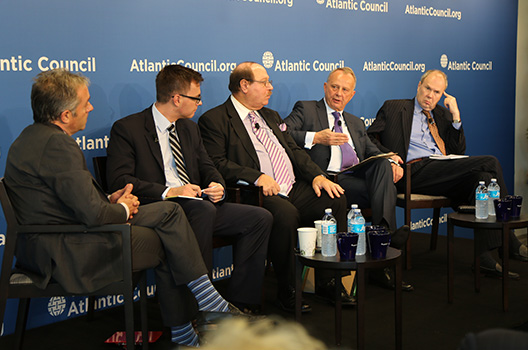 On December 3, 2015, the Atlantic Council’s Brent Scowcroft Center on International Security launched a new report, “Global System on the Brink: Pathways toward a New Normal.” This joint global trends assessment conducted by the Scowcroft Center’s Strategic Foresight Initiative (SFI) and the Primakov Institute of World Economy and International Relations (IMEMO) observed potential channels for US and Russian stakeholders to redefine cooperation in an increasingly tumultuous world. In a conversation moderated by the Chief US Commentator of the Financial Times, Edward Luce, the principal authors of the report from SFI and IMEMO outlined current challenges and key targets for improved cooperation between the United States, Russia, and the global community.

Opening remarks set the scene, outlining currently strained US-Russian relations, which stem from mutual misperceptions and former instances of mistrust. IMEMO Deputy Director Feodor Voitolovsky noted the politics of the 1990s as a real turning point for the disintegration of US-Russian ties. This corrosion worsened when the United States became apathetic to Russia’s desire for further engagement with NATO’s cooperative security treaty in 2001. Recent developments in Ukraine, the US political circus around the 2016 presidential campaigns, and contentious media reporting has strained the US-Russia relationship further. SFI Director Mathew Burrows cited American exceptionalism as an additional major roadblock for strategic alliances with other world powers. Despite these differences and past conflicts, the report’s authors found common ground between both countries and emphasized the need to work together.

For example, we see several Western powers pivoting to Asia and building better diplomatic and economic partnerships. The United States and Russia are no exception in these efforts to connect with various Asian powers. Scowcroft Center Senior Fellow Robert A. Manning believes that this is an area where both countries can work together. Actively working on reforms to international institutions, such as the Asian Development Bank and the UN Security Council, allows the United States and Russia to build a more prosperous global community and better bilateral relations.

In regards to Middle East policy, the United States and Russia have differing strategies. Even in the aftermath of the Paris attacks, the outlook appears pessimistic in regards to bipartisan cooperation. According to IMEMO Director Alexander Dynkin, both countries are operating under “asymmetric realities,” with a limited knowledge of the Middle East. This geopolitical battleground, however, could be another possible area of convergence that allows for diplomatic resolution.

All in all, while relations between the United States and Russia remain tense, both can and should work together in securing a better future.