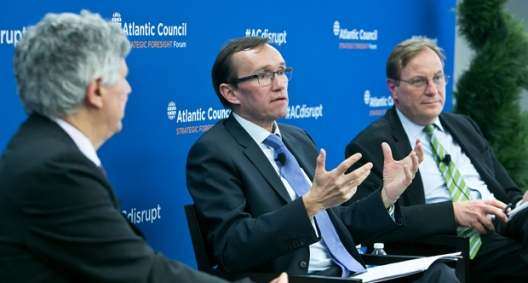 A new report and two days of dynamic discussion — in the room and online — explored the challenges and opportunites the US and the world face in the upcoming technology revolution. The opening debate and each session were recorded. You can watch via the playlist below. Council experts weighed in with their initial reactions to panels throughout the two days. Those links are below as well.

Entitled Harnessing Disruption, the Forum highlighed ways the technology revolution is shaping government, business, and civil society. Many panelists focused on the effects of technology on individual empowerment and globalization, and the need by both public and private sectors to better adapt to coming change. Quick blogs were written by staff following each session:

Some of the more memorable quotes from the Forum included:

“It’s insane that schools of public policy do not teach coding. Digital literacy is going to be critical for the future; coding needs to be built into the education system.”
– Anne-Marie Slaughter, President and CEO, New America Foundation, on the US education system
“Globalization is eating away at the Westphalian world. Less and less of what a country needs to do can be done alone.”
–Brent Scowcroft, Interim Chairmain, Atlantic Council, on globalization
“We need a global dialogue on what we want the Internet to look like. The current model is under strain.”-Espen Barth Eide, former Minister of Foreign Affairs, Government of Norway, on Internet governance
“E-I-E-I-O government supports Education, Infrastructure, Entrepreneurship, Immigration, and Original research.” –Andrew McAfee, Principal Research Scientist, MIT Center for Digital Business, mnemonic device illustrating the role of government in the changing world
“We are learning to live with uncertainty and need to be humble about what we can control.” –Peter Schwartz, Senior Vice President, Global Government Relations and Strategic Planning, Salesforce.com, Inc., on managing change

To wrap up the Forum, Fred Kempe asked the last panel to each name the one thing they thought was most important to our long-term global success. The answers were profound in their simplicity. Peter Schwartz said learning to live with uncertainty, while Peter Ho named good governance. General Scowcroft summed up the whole forum in one word: Judgement. “But,” he went on to say, “I don’t know how you teach judgement.”

You can watch each of the panels in the player below or on our YouTube channel, and the conversation is still going on online using the hashtag #ACdisrupt.

.@peterschwartz2: Leaders need to have humility. Leaders who believe they can control complexity are dangerous. Harness instead. #ACdisrupt

Scowcroft: The answer is judgement, I don’t know how you teach judgement #ACdisrupt

#ACdisrupt end thought: the future is immensely unsure, but it is ours to build.

The technology & big data are only enablers in finding solutions to future challenges. #FPTrends #ACdisrupt