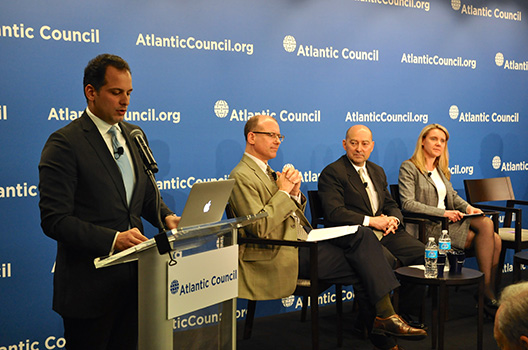 The Art of Future Warfare, an initiative of the Atlantic Council’s Brent Scowcroft Center on International Security, hosted an event titled “How the Next Great War Begins” on March 17. The event served as a conclusion to the initiative’s recent essay contest that explored the same question. With a distinguished panel that included Admiral James Stavridis, Dean of The Fletcher School at Tufts University and former NATO Supreme Allied Commander; Siobhan Gorman, Director of the Brunswick Group and former Wall Street Journal reporter; and Ryan Evans, the CEO and Editor-In-Chief of War on the Rocks, there was no shortage of interesting perspectives and insights.

Barry Pavel, Vice President and Director of the Brent Scowcroft Center on International Security, opened the event before Nikolas Katsimpras, Adjunct Lecturer at Columbia University and the winner of the essay competition. Setting the context for the discussion, Nikolas read his essay, “Coffee, Wi-Fi, and the Moon,” which sees a combination of weaponized Wi-Fi, hackable health implants, and great power politics sparking the next Great War. With that context established, the panel discussed issues ranging from cyber warfare to the danger of global pandemics. Steven Grundman, M.A. and George Lund Fellow at the Atlantic Council, moderated the panel discussion before opening up to a floor discussion. Points from the audience continued to invoke interesting perspectives and questions ranging from the value of fictional prediction to the impact of society on warfare.

The Art of Future Warfare is an initiative that seeks to engage artists of all backgrounds in the prediction of future conflict. By hosting events and competitions and publishing creative futuristic analyses, this initiative seeks to foster imagination in the security sector. Its current contest, judged by best-selling science-fiction writer David Brin, invites writers to explore what an interstellar conflict might look like in the final decade of the 21st century.