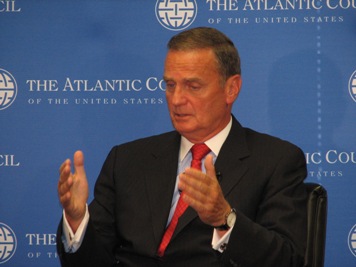 The current debate on Iraq is wrongly “focused on the tactics of the moment” rather than the long-term strategic questions, retired Marine General James L. Jones told a full house at the Atlantic Council and a C-SPAN audience. The way forward requires thinking “beyond the next election.”

Jones, the Atlantic Council Chairman who recently led a blue ribbon panel of 15 retired generals and five distinguished police chiefs to study the security situation in Iraq, observed that “the surge is a tactic, not a strategy.” While it has “made a statistical difference” against the militias and al Qaeda, “the idea that the armed forces of Iraq by themselves can bring an end to sectarian violence is backwards.” Ultimately, the government must achieve political reconciliation. Outside powers can help that process along through “a Dayton-like conference” which would “underscore the absolute criticality of reconciliation.” The accord would need to address regional issues, most notably “Iran’s rapidly increasing threat to Iraq’s stability,” in addition to Iraq’s internal security.

First, however, the international community must recognize that Iraq is “not just a U.S. problem.” Developments there will affect the entire Middle East and could have implications for the global economy and energy supply. Outcomes in Iraq will also define future counter-terrorism strategies, Jones said.

The panel’s report, which was presented to Congress on Sept. 6, presents some positive developments in Iraq’s security situation, including “statistically very impressive” reductions in terrorism—particularly in Anbar province, where the local population and the coalition have worked together to root out al Qaeda. Based on current trends, Iraq’s security situation is likely to improve in the next 18 months. Iraq’s military structure also provides “some source for optimism” for future security because it has all the “basic underpinnings” of a sound organization, Jones said. However, even though the security forces are now better able to respond to internal threats, they remain unable to defend the border. It is likely to be “some years” before they are capable of protect the nation from external threats without foreign assistance, according to Jones.

The Global Leadership Series is made possible with the support of UBS.