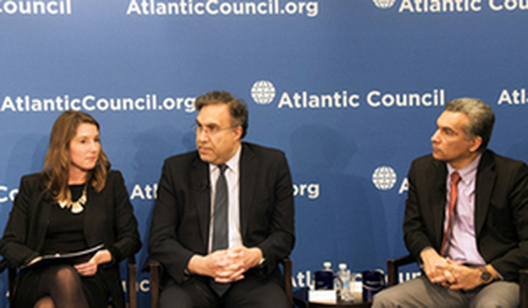 During the discussion, each of the panel participants highlighted the opportunities and challenges facing Iraq’s energy potential. Ellen Scholl acknowledged that Iraq has achieved significant production increases in the past, but addressed the current need to create certainty for future and continuing investments. To achieve this, resource development and revenue sharing need to be considered and Iraq needs to address the unresolved political issues between the central government of Iraq and the Kurdistan Regional Government to eliminate political risk for investors. Addressing these obstacles is extremely important at a time when the country is being rebuilt, as the resources from the oil industry would be essential to those efforts.

Luay Al-Khatteeb asserted that the potential of gas development will continue to be great, but this will require continued investment and development from major international oil companies, the prospect of which is possible. He pointed out that poor policies created as a result of abuse of power between Erbil and Baghdad have caused both parties to experience a significant loss in revenue and have resulted in debt. They need to come to an agreement to develop a gas strategy that could benefit both parties in order to attract investors. He stated that to significantly increase oil production, half of the efforts need to come from oil fields managed by national oil companies and the other half from international oil companies’ contributions. He reiterated the need for international investment in the Iraqi oil industry not only for economic gains, but for security reasons. If Iraq’s economy collapses, the repercussions will create a security issue for the international community as a whole. However, he pointed out that this money should not be given unconditionally.

Harith Hasan touched on Iraqi government corruption and decentralization efforts and stressed the need for government reforms to get the most from the financial opportunity the energy sector affords. He also enumerated the security issues that the Iraqi federal government is currently facing. In regards specifically to the oil industry, these threats include the rise of armed tribal groups that threaten to use violence against companies in oil facilities to get jobs for their own people or to extract resources, as well as the evolution of the structure of an informal economy around oil fields. These security threats make development of those oil fields and oil infrastructure difficult and must be addressed.