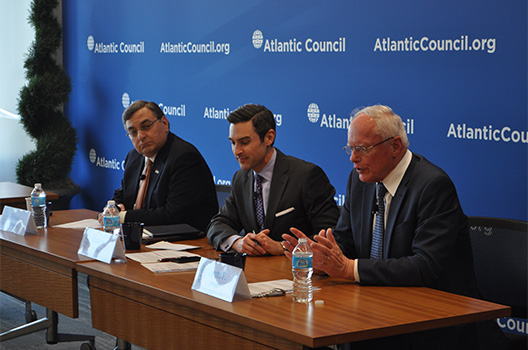 Following Iraq’s April 30 parliamentary elections, the Rafik Hariri Center for the Middle East hosted a discussion on implications of the latest round of voting on Iraq’s future. Atlantic Council Executive Vice President Damon Wilson moderated a discussion with Ambassador James Jeffrey, the former US envoy to Iraq, and Ambassador Feisal Istrabadi, who was previously Iraq’s ambassador to the United Nations.

Wilson highlighted unique impact of developments in Iraq on both the region and on US policy in the Middle East. Iraq’s deep connection to its neighbors means that conditions in the country, whether stability or continued strife, will influence events elsewhere. The United States, he added, continues to carry the legacy of Iraq in both how it views the region and perceives its capacity for influence.

Ambassadors Jeffrey and Istrabadi agreed that despite shortcomings, the fact that Iraq conducted a successful election, with a similar turnout to 2010 levels and with no US troops, is itself a noteworthy achievement. Looking to the future, Jeffrey cautioned that while it is important to follow the minutiae of political bargaining between coalitions, “nothing is decided until everything is decided” when it comes to forming a government in Iraq.

Istrabadi noted that incumbent Nuri al-Maliki, although likely to be a big winner, is clearly beset by dissatisfied parties and is short on allies. Sunnis, particularly in Anbar, remain aggrieved with no sign of rapprochement from Baghdad; populations in the South, most of them Shia, continue to see flagging services in spite of the rise in oil revenues; and factions of the Kurdistan Regional Government remain at odds with Maliki over a number of issues, including constitutional rights.

Istrabadi called on observers in Iraq and elsewhere to avoid analysis that emphasizes political personalities, and to reorient policy and political thought toward institution building. Jeffrey cautioned that the United States is no longer invested these kinds of policies. Influence is limited, but also the United States attempted the institutions building approach for over a decade, and now Iraq is “by far” worse off than during the US withdrawal in 2011. Istrabadi rejected the narrative that the United States is powerless, arguing that surely there was a middle ground between military intervention and political detachment.