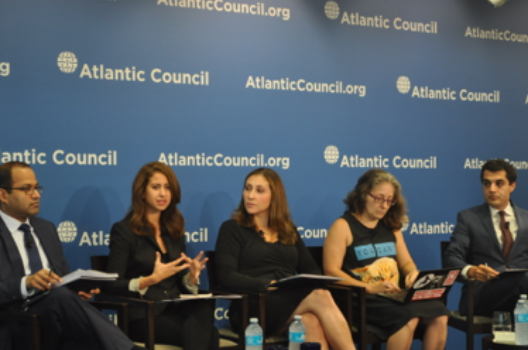 On August 21st 2017, the South Asia Center at the Atlantic Council hosted a panel discussion on the inroads made by The Islamic State of Iraq and Al Sham (ISIS) into South Asia. The panel discussed how ISIS operates as a group, how it impacts the states that make up South Asia internally, and how South Asian governments-and the United States-should respond to this growing phenomenon. Bharath Gopalaswamy, director of the South Asia Center, moderated a discussion with Jasmine El-Gamal, resident Senior Fellow with the Brent Scowcroft Center on International Security at the Atlantic Council, Christine Fair, Provost’s Distinguished Associate Professor in the Security Studies Program at Georgetown University, Javid Ahmad, nonresident fellow with the Atlantic Council’s South Asia Center, and Hagar Hajjar Chemali, former Middle East Policy Adviser at the US Department of the Treasury.

The panel talked about the manner in which ISIS has infiltrated India, Pakistan, Bangladesh, Afghanistan and Myanmar and how the group maintains a robust social media presence throughout the region. The speakers addressed the issues of cyber security, illicit flows of money and cultural factors impacting the growth of radicalization in South Asia. They discussed the importance of resolving these issues and the limitations of present approaches as well as proposed new approaches.