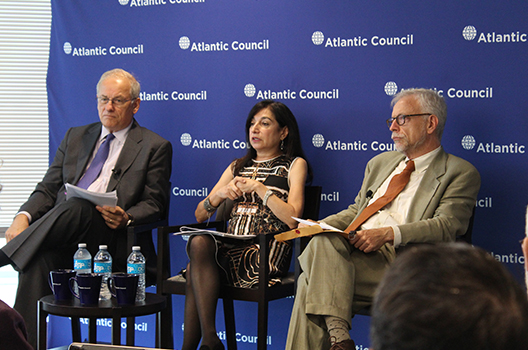 Ambassador Frederic Hof, director of the Rafik Hariri Center, opened the program by stating that while there is no shortage of think-tanks queueing up to influence the future president, MEST has not just focused on American interests in the region but also on community building, good governance, and winding down regional tensions.

Abdo began by highlighting that the working group responsible for this report was mostly composed of people from the region rather than Washington. She then summarized the key findings of the report, which underlined the role of religion as one of the driving forces behind violence, against the current governmental and academic trends that designate religion as merely an afterthought to state collapse and economic grievances. She then stressed the importance of terminology and cautioned against the inappropriate use of religious terms, citing, for example, John Kerry’s recent use of the word “takfiri” to describe some groups in the Middle East. Finally, she explained that the United States should not play a direct role in the religious aspect of the conflict since, as she argued, it is a Muslim issue which should be dealt with by Muslims.

Brown began his remarks by explaining the correlation between state authority and religious authority. He then added that states were experiencing a crisis of identity particularly due to the decentralization of religious authority resulting from the spread of education and communication. A further separation occurs between the youth and established religious establishments that are experiencing difficulty in relating to younger audiences. In a similar fashion, those officials who could have the power to influence religious understanding through textbooks and policy are simply not equipped to present their teachings in a persuasive way. Brown stressed that Western countries do not possess the right set of tools to intervene in the realm of religion. He concluded by recalling the failures of the United States in dealing with the Iranian revolution of 1979.

Hof questioned both Abdo and Brown about the Islamic State of Iraq and al-Sham (ISIS) and the role of Islam in countering violent extremism. Abdo explained that while the vast majority of Muslims neither agree with the methods used by ISIS nor embrace their ideology, there exists some support for parts of ISIS’s ideology. She added that some people in Syria and Iraq support ISIS simply because they lack credible alternatives in the region. Brown corroborated Abdo’s arguments and added that in order to understand ISIS, it is imperative to understand its religious arguments.

Hof then questioned the results of the Obama administration’s countering violent extremism policies. Abdo responded that the so-called “counter narrative” should not come from the US government but from within Muslim societies. She then explained that the United States needs to stop thinking of Arab societies in a post-9/11 context and should rather consider a post-Arab Spring context in which the state is failing to respond to the preoccupations of its citizens. Brown noted that policies of counter messaging do neither harm nor good and were therefore inefficient.