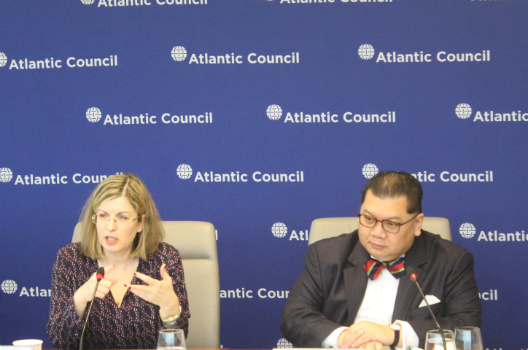 On Wednesday, March 7, the Atlantic Council’s Africa Center hosted a roundtable for African ambassadors with Ms. Dana Benvenisti-Gabay, Director for Regional Security and Counter Terrorism at the Ministry of Foreign Affairs of the State of Israel.

In her remarks, Benvenisti-Gabay stressed the increasing strategic importance of Africa to the State of Israel, both commercially and diplomatically. She spoke at length about Israel’s new Counter-Terrorism Law, which was adopted by parliament in June 2016 and seeks to provide law enforcement agencies with more effective tools to combat modern terrorist threats, paying close attention to the rights and needs of security forces and civilians in equilibrium. Benvenisti-Gabay went on to highlight three priority areas of the of the Counter Terrorism Department in dealing with issues of terror in Africa and beyond, including efforts to neutralize potential terrorist threats, cut cash flows to terrorist groups, and increase the capacity of security forces to prevent and enhance coordination efforts to combat terrorism.

A discussion followed Benvenisti-Gabay’s remarks, focusing on efforts to counter terrorist narratives and fill gaps in the intelligence apparatus of African governments to stem the threat of terrorism across the continent and improve efforts to combat its rise.

Participants in the roundtable included the Ambassadors of Angola, Cabo Verde, South Africa, and Togo; the Chargés d’affaires, ad interim of Ethiopia, Rwanda, and Uganda; and senior diplomatic officials from several other African embassies.