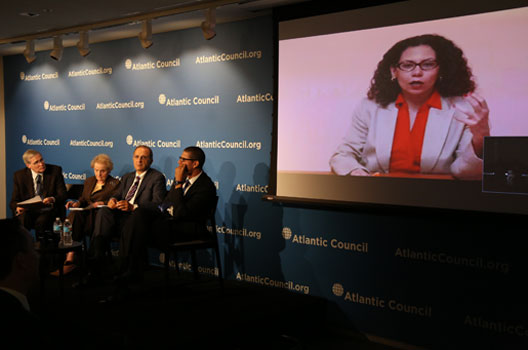 On June 4, 2015, the Atlantic Council’s Rafik Hariri Center for the Middle East hosted the public launch of the Middle East Strategy Task Force (MEST), a new initiative focused on responding more strategically and comprehensively to the collapse of regional order amid a tide of failing states. The Task Force aims to examine the underlying causes of the ongoing crises in the Middle East to formulate a coherent, practical strategy to empower the international community and regional stakeholders to respond to the challenge. The bipartisan effort is co-chaired by former US Secretary of State Madeleine K. Albright and former White House National Security Advisor Stephen J. Hadley.

The focus of the event was Arab public opinion, and to that end featured presentations by Dr. James Zogby of Zogby Research Services, and Gallup’s Mohammed Younis. Dr. Rabab Al-Mahdi of the American University in Cairo joined via videoconference, sharing her perspective in response to the presentations.

Atlantic Council President and CEO Frederick Kempe opened the event by contextualizing MEST’s place in the broader Atlantic Council Strategy Initiative that seeks to inform policymakers around the world on an array of foreign policy challenges. He further noted that the Strategy Initiative seeks to inform the 2016 debate as US presidential candidates begin formulating their policy visions, emphasizing that the Initiative is designed to have an impact regardless of who is the next president. He also added that the Task Force is not meant to be “Americans talking to Americans about what others ought to do,” but rather a community of policymakers first and foremost informed by stakeholders in the Middle East about what they want for their societies.

Albright spoke in detail about the project’s origins and the need it fills within the policy community. She also highlighted the wide cadre of Senior Advisers that the Task Force has assembled from the Middle East. The United States, and Europe, who will provide counsel and diverse perspectives to the Co-Chairs as they develop the Task Force’s findings and recommendations. Albright also spoke about the MEST Working Groups, which are comprised of international experts, from the United States and abroad, dedicated to the following subjects:

Next, Stephen Hadley emphasized that just as the project intends to begin with views from the region to inform its work, so too will the first public Task Force event. The key questions guiding the Task Force are “What do the people of the region want for their own societies?” and “How do we help them get there?”

Hadley introduced a ‘man/woman-on-the-street’ interview video compilation, which Sky News Arabia produced for the event. Following the film, he moderated a distinguished panel to discuss Arab public opinion polling data. James Zogby emphasized the priorities of people in the Middle East. Country to country, year to year, the top three priorities were consistently identified as healthcare, employment, and education. He also noted that polling data suggests that opinion in the Arab world is consistently conflicted. Arabs want the United States and the international community to help solve their problems, but tend to be distrustful of military adventures and interventions. Mohammed Younis emphasized “well-being” in the Arab world, defined by how individuals view the quality of their lives today, and how they predict the quality of their lives in five years. Despite stable or even improving gross domestic products in some countries, well-being scores continued to drop in his data set. Other measures such as food security, payroll to population, and perceptions of safety also demonstrated deteriorating conditions in the region. Using Iraq as an example, Younis showed how challenging domestic conditions contribute to the loss of confidence in national institutions.

Rabab El Mahdi responded by saying that, while she cannot speak for the entire region, she appreciated that the polling reinforced the simple but often-overlooked fact that people in the Middle East are like people everywhere else. They focus on their livelihoods, on their safety, and on their families. As she put it: “When people have to make a choice between their personal safety and their freedoms, between the safety of their children and being able to live in a democracy, they, rationally, tend to choose their own personal safety.” She also remarked that having a plurality of common enemies does not translate into a natural alliance between the United States and the region. Indeed, in the region there is still a pervasive feeling of distrust of the United States.

Following the panel discussion, Hadley took questions from the audience, comprised of ambassadors and representatives from Washington’s diplomatic community, US government officials, and regional policy and development experts. One ambassador from the region asked if the Task Force intended to detail the United States’ expectations from the region, saying that stakeholders there do not fully understand them. Hadley responded that rather than focusing on what the United States wants from the region and what the region wants from the United States, the Task Force intends to take a step back to establish first what the region wants for itself. Another guest asked about the economic prospects for the Middle East, calling the primary challenge for the region fostering the ingenuity of regional entrepreneurs. Hadley noted that MEST has an entire Working Group devoted to revitalizing economies in the Middle East. A question from Twitter also inquired about economics, specifically empowering public-private partnerships. Zogby recalled the fund that the United States created in the wake of the Arab Spring that was meant to empower small and medium-sized enterprises. Another participant asked what role the US Agency for International Development might play in the region given the findings of the public opinion polls. Younis recommended focusing on projects that are apolitical but nonetheless crucial, and taking a demand-driven approach to projects in the region, emphasizing initiatives desired by the people that can have a confidence-building effect. Hadley then thanked the panel as well as the audience before adjourning the event.