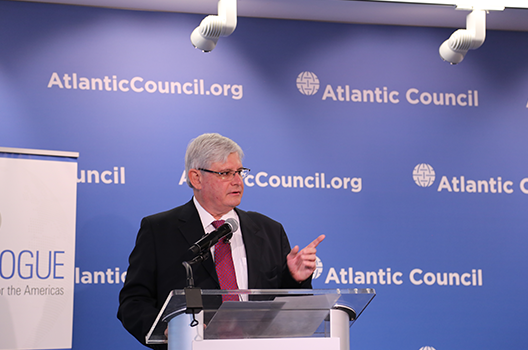 Corruption scandals continue to shake Latin America´s political landscape, but several institutions and anti-corruption movements have risen to the challenge. Across the region, vigorous investigations have implicated elite circles of business and politics –deemed untouchable– in major graft cases. Unprecedented in scale and impact, Brazil´s Lava Jato probe stands as the centerpiece of this new anti-corruption wave. As the fight against corruption gains momentum, the Brazilian experience leaves key lessons to share regarding Latin America´s judicial institutions and cooperation.

Rodrigo Janot, Prosecutor General of Brazil, calls for international legal cooperation in the fight against corruption.”

After offering opening remarks, Janot and Blanco stressed the importance of international cooperation in probing corruption and ensuring asset recovery. Blanco stated that corruptors “don´t have borders. We [prosecutors] do. And we need to respect each other’s sovereign laws. But we also need to be nimble in how we do it.”

Janot, whose office spearheads investigations of Brazil´s former and current heads of state and its most prominent business leaders, pointed to the region´s institutional transformation. “Forty-five years ago, Latin America was known for the number of its generals, today it is known for the number of its judges and prosecutors.” A mobilized and vigilant civil society has been a driving force in this transformation, not only in Brazil, but globally. “They are demanding action, they are no longer silent,” added Blanco.

Despite a deteriorating political crisis in Brazil, “The steps taken [in the fight against corruption] are irreversible. I don´t believe that Brazilian society will accept going back to the past system,” concluded Janot.

In the panel discussion, speakers highlighted that Brazil´s flexibility, the adaptation of cooperative prosecution, the specialization of civil servants´ functions, and the sharing of information are key elements bringing corruption acts to light.

Although Brazil has showcased institutional capacity in recent graft probes, Valeixo claimed the fight against corruption is ultimately “in the hands of Brazilian society.” Multiple institutions must continue to work jointly in the fight against corruption, as they have in Brazil, but Valeixo added “there are improvements that can still be made. We [the Federal Police] can enjoy a lot more autonomy, especially financial autonomy.”

Brazil has rapidly strengthened its legal system, and international cooperation has enhanced its investigation processes and tools. There are obstacles to global cooperation and centralizing authority in the fight against corruption, however. “Law enforcement is extremely territorial,” Stokes noted.  “[Lessons learned from Lava Jato are] making sure that foreign authorities are working cooperatively not to double punish companies, not to unnecessarily investigate or step over each other in investigations.”

Rizzo argued that the Lava Jato investigation also fostered international collaboration in journalism. The investigation was remarkably transparent, and while all the public information kept the press from doing some of their own digging, it incentivized cooperation. “There is a group of journalists from six countries working on stories together. I think that´s something we need to encourage, that we didn´t do at the beginning of the investigation,” she stated.

Lava Jato, which has implicated some of the major parties in Brazil, has left politicians and prosecutors at odds. Amid political turmoil, elected officials are looking to shield themselves against ongoing investigations.

A recent survey conducted by Jota in the Brazilian Congress indicates that Congress’s current view of the judiciary is highly negative. President Temer´s relationship with the Congress, while notably better than his predecessor´s, is on a downward trajectory. The Abuse of Authority project, which would give Congress power to block prosecutors if investigations are deemed “abusive” has considerable legislative support. “This is a signaling that politicians might be trying to get back to the investigators,” Mello argued. There is also strong support for political reform, but officials could be backing reform solely to gain benefits. “The question is, what kind of change in the political system are they thinking about?”  He later added, “This [political reform] might go in the wrong direction and actually decrease accountability.”

Transparent judicial processes, independent government institutions, a free and active press, and a mobilized civil society will safeguard Latin America’s course in the fight against corruption. Whether these lessons from Brazil can inspire deeper, region-wide reform remains to be seen.