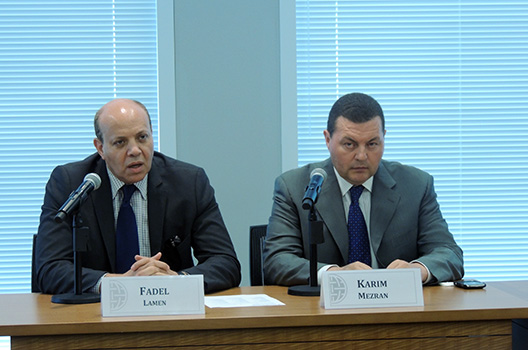 Libya’s democratic promise is more precarious than ever. On the one hand, the government recently reached a deal with armed groups to end a year-long blockade of critical oil fields, and the election commission released final results from the recent parliamentary elections. On the other, a political struggle is taking on an increasingly violent dimension, while targeted killings, crime, and power outages continue to disrupt daily life. On Monday, July 21, 2014, the Atlantic Council hosted Fadel Lamen for a Libya Working Group briefing on recent developments in the country and prospects for national dialogue. Fadel Lamen is president of Libya’s National Dialogue Preparatory Commission and a nonresident fellow with the Rafik Hariri Center for the Middle East. Atlantic Council Senior Fellow Karim Mezran moderated the discussion.

Fadel Lamen made clear that the recent escalation is a result of international stakeholders and Libyan authorities managing problems rather than solving them. The violent attacks on the main airport in Tripoli is a visible, timely example of problems that layer and build critical mass over time, as there was no deterrence when the first and second airports were closed. Lamen explained that many of the current struggles are not inherent to Libya, but they have become institutionalized and legitimized.

In order to solve problems rather than manage them, Libya must have stability. In a country where there are no institutions, but many weapons and warring militias, it is only consensus that will create the space and security to allow for a successful third transition. First, there must be a crisis dialogue, or political dialogue, to bring all conflicting parties to the table to negotiate a transitional agreement. This would outline rules for how to behave and govern and determine priorities for the transition. Only then can a national dialogue meet to determine Libya’s political future. Lamen sees a role for international actors in the process as players to provide accountability, will, and technical expertise. Lamen emphasized that Libyans want political stability and a chance to work things out, and while there are certainly monumental challenges, there is a way forward by creating a center of gravity through majority consensus.