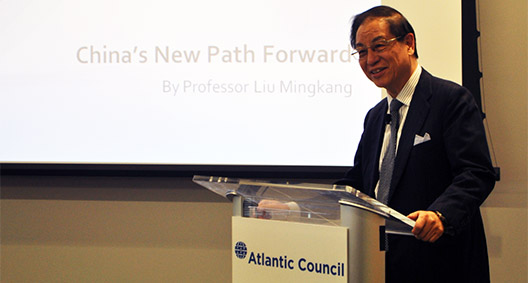 Mr. Liu Mingkang, former chairman of the Chinese Banking Regulatory Commission and honorary professor at the Chinese University of Hong Kong’s School of Business, highlighted several important areas for Chinese economic and social reform over the next decade. Speaking at the Atlantic Council on April 16, Liu focused on developments from the Chinese Communist Party’s third plenum, noting that critical areas for reform include foreign investment, fiscal transparency, and urban governance.


Ambassador Julia Chang Bloch, president of the US-China Education Trust and Atlantic Council board director, delivered welcoming remarks. Bloch said that China’s recent reform agenda “will have deep implications, not only for Chinese society, but for the Sino-US relationship more broadly,” and “provides great opportunities for both the United States and China to promote financial collaboration, to build mutual trust, and to share global responsibilities.”

In the first quarter of 2014, Chinese GDP grew 7.3 percent, down from 8.0 percent in the fourth quarter of 2013. However, Liu said, optimism remained. Chinese economic optimism is predominantly driven by expectations about the success of systemic reforms. China’s business community still faces several key challenges on the road to reform, including “rising labor costs, inconsistent regulatory interpretation, shortages of skilled labor, and an imbalanced eco-system.” Liu asserted that the Chinese government has been taking substantive steps in recent months to improve its economic and social conditions in the spirit of the reform agenda coming out of the third plenum.

Liu stated that the Chinese government has made concerted efforts to reduce government controls and barriers to market access. The country is preparing itself, he said, for potential shocks by increasing flexibility in the foreign exchange rate regime and liberalizing interest rates in China. Liu cited four hundred and sixteen government requirements have been reduced or eliminated as of 2013, with at least two hundred additional items undergoing re-examination in 2014.

On the subject of property rights, the third plenum’s agenda stresses the importance of protecting property rights of non-State Owned Enterprises (SOEs). The government intends to facilitate the development of an innovative ecosystem that “grants sufficient and equal protection to both domestically owned firms and foreign firms.”

In response to a question about foreign exchange reserves held by China, Liu said that “more than half” are in the US Treasury, as US Treasury bonds are perceived by bond holders to be a secure investment. Ultimately, Mr. Liu concluded, the market would be greatly improved by greater government transparency. “People must tell the truth,” he insisted.

On the CCP’s efforts to build credible governance, Liu said that “The Party used to be focused on decisiveness; now it realizes that it has to deliver credibility.” He emphasized the importance of building the rule of law in China, saying that the rule of law is the crux of regulating China’s financial market, combating corruption, and providing social security to the people. “If you put three things under the sun, the rule of the law, greater transparency, and then democracy, then people will feel safe.”

Liu then identified several areas for increased US-Sino cooperation, including clean energy, trade, urban planning and development, and in financial services regulation. “If we can decrease the misunderstandings between the two countries, we can achieved so many things. We can change the world.”

Professor Liu’s Presentation is available below