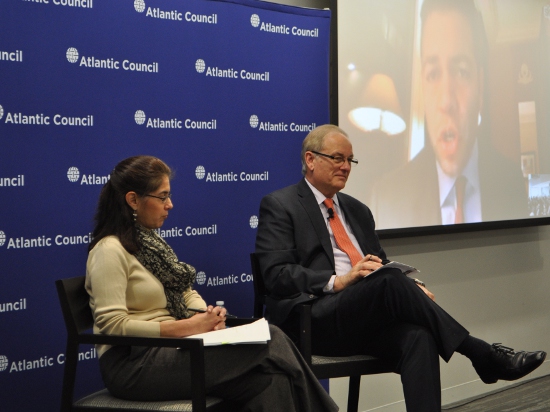 Following the rancorous opening of the Geneva II peace talks, and amid competing proposals and counter-proposals by the delegations of the Syrian government and the opposition, the Rafik Hariri Center for the Middle East convened a panel of experts on January 28, 2014 to parse the talks to date and to forecast possible outcomes. Ambassador Frederic C. Hof, who participated in the first round of UN-sponsored Geneva negotiations in 2012, framed the conversation. He was joined in Washington by Mona Yacoubian, Senior Advisor on the Middle East at the Stimson Center, who provided analysis of the talks to date, and was joined by video from the sidelines of the negotiations in Geneva by Bassel Korkor, legal adviser for the National Coalition of Syrian Revolution and Opposition Forces.

Yacoubian began by explaining that though prospects going into talks appeared bleak, the fact that both parties are still at the table is significant and indicates that both parties see value in continuing talks. Korkor was able to provide an on-the-ground synopsis and analysis from Geneva, discussing thoroughly how talks have progressed, the interests that both sides are focusing on, and where progress is most likely to be made. Though he indicated that the regime in Syria—as well as its allies—firmly refuse to discuss political transition, panelists were in agreement that humanitarian aid and assistance is one avenue where parties may be able to work together. Increased humanitarian efforts could go a long way to build confidence between the parties, which may open political avenues at a later date. Korkor went on to say that though the regime appears obstinate, at times incoherent, the opposition remains committed to the Geneva talks and is very serious about sticking out the process to find an agreement.

The cracks in the regime’s intransigence, Korkor said, are its allies in Russia, Iran, China, and elsewhere. Political engagement there could significantly alter the regime’s position. The other panelists were in agreement especially regarding Iran. Yacoubian admitted that trepidation in this regard was warranted, but Iran and Saudi Arabia are the two regional players that are fueling the crisis in Syria, and de-escalation will require their involvement. Hof suggested that the key issue from Iran’s perspective vis-à-vis relations with the United States were the nuclear talks, and that leverage could be applied on this front get a reaction on Iran’s Syrian policy.