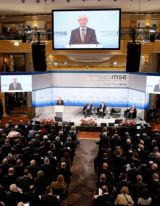 Against the backdrop of widespread protests in Ukraine, the unabated civil war in Syria, and a growing sense of US disengagement from Europe, top transatlantic policymakers and thinkers gathered at the 50th Munich Security Conference to discuss the transatlantic community’s most difficult security challenges.

Following the conference, the Atlantic Council and Airbus hosted its third annual off-the-record luncheon to engage a small group of high-level transatlantic leaders including heads of state, ministers of defense, and ministers of foreign affairs in a follow-up discussion on the ideas exchanged at the Munich conference. Participants discussed the implications of the Snowden scandal on US-European relations, prospects for a final nuclear negotiation with Iran, the unfolding protests in Ukraine, and the future of NATO as it prepares to draw down from its mission in Afghanistan and enter a new chapter in its history.

The Munich Security Conference took place January 31 to February 2 with roughly twenty heads of state and government and fifty foreign and defense ministers in attendance.