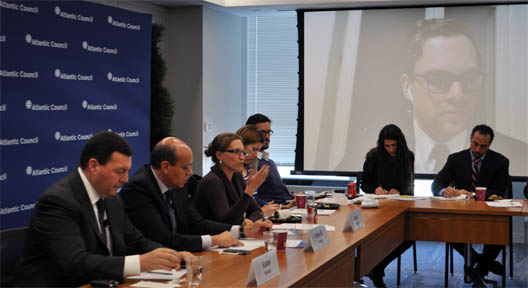 As Libya embarks on drafting a new constitution and convening a national dialogue, the country faces significant security obstacles which threaten progress on these important milestones. On Wednesday, January 22, 2014, the Rafik Hariri Center for the Middle East launched a new issue brief, “Negotiating Libya’s Constitution,” coauthored by senior fellow Karim Mezran and nonresident fellow Duncan Pickard. A roundtable, organized under the auspices of the Libya Working Group – a joint initiative with the Project on Middle East Democracy and Freedom House, to explore the brief and broader challenges, including how a national dialogue process could bolster Libya’s transition. The event featured commentary from Pickard; Susan Stigant, a senior program officer at the United States Institute of Peace; and Fadel Lamen, a Hariri Center nonresident fellow and current chair of the preparatory National Dialogue Commission in Libya. Mezran moderated the discussion.

Pickard highlighted Tunisia’s promising transition as a possible model for Libya to emulate, while pointing out some major differences between the countries: namely Libya’s low level of institutionalization, the lack of a national vision, and questions surrounding the elites’ ability to implement and enforce changes in a highly weaponized environment.

Stigant drew lessons from the case of South Africa, highlighting the importance of the citizens’ commitment to finding a solution, the inclusiveness of the overall process, and the concerted effort to foster trust among the stakeholders.

Transitioning to the unique case of Libya, Lamen countered the notion that Libya is rapidly nearing failed state status, questioning whether the country even has a state. While Libyans prepare to elect the constitution draft assembly, Lamen stressed that the national dialogue would provide the platform to reach consensus on a national charter and proposed solutions to some of Libya’s most critical challenges.