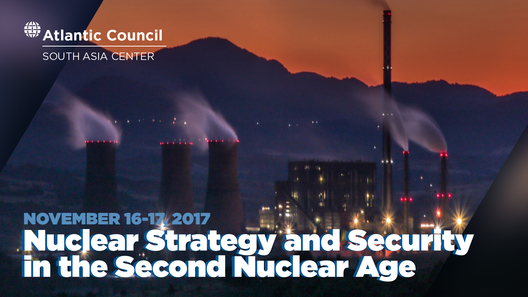 The Atlantic Council’s South Asia Center hosted its first ‘Nuclear Strategy and Security in the Second Nuclear Age Conference’ on November 16 and 17, 2017 in Washington, DC. The conference brought together experts, officials, and leaders from across the world and multiple international organizations with the aim of understanding the emergence of Asia as the epicenter of the second nuclear age.

The conference began with the launch of a new report by Gaurav Kampani and Bharath Gopalaswamy, entitled Asia in the “Second Nuclear Age”. The report examines nuclear issues from the 1990s onward; China’s decision to stir out of its strategic languor and modernize its nuclear arsenal, the resolve of India and Pakistan to deploy operational nuclear forces, and, more recently, North Korea’s sprint to develop reliable long range nuclear capabilities that can credibly threaten the continental United States, which has led many to aver that the “second nuclear age” will rival the worst aspects of the first.

Thereafter, three special lectures and three expert panels ranging from Ambassador (Ret.) R. Nicholas Burns, former Secretary of Energy Ernest J. Moniz, Dr. Lassina Zerbo, Brigadier Naeem Salik, Lieutenant General (Dr.) Prakash Menon, and others discussed nuclear modernization and the future of the nonproliferation regime, technological changes and the future of deterrence stability, the nature of the nuclear competition in Asia during the second nuclear age, relevance of the comprehensive nuclear test-ban treaty, and the dueling significance of terrorism versus insider threats to the safety of nuclear arsenals.

The two-day Nuclear Strategy and Security in the Second Nuclear Age Conference can be viewed here: Day One and Day Two