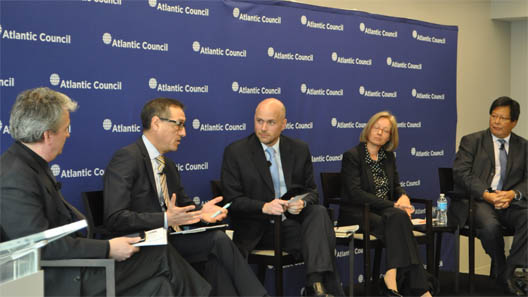 Cities are at the forefront of global leadership. Not only are cities where all global trends—such as increased diffusion of power, individual empowerment, and the complex interplay of the food-water-energy nexus—come together, but local governments and their partners are already addressing this century’s great global challenges and finding innovative solutions.

Mathew Burrows, director of the Strategic Foresight Initiative, highlighted the ways in which urbanization has become an important theme in futures work. Delivering the opening address at a February 4th event hosted by the Atlantic Council’s Adrienne Arsht Latin America Center and Strategic Foresight Initiative focused on discussing how to achieve inclusive urban development through innovative thinking Burrows noted that Medellín, Colombia  is a city that has transformed itself in remarkable fashion over the past couple decades, from having the unfortunate reputation of being the world’s murder capital to enjoying a reputation for inclusive governance, high-quality public architecture, and sustainable transportation.

This session was the first in a national series organized by the US Department of Housing and Urban Development, UN-Habitat, and other partners. The series will prepare the US delegation for UN-HABITAT’s World Urban Forum, to be held this April in Medellín, Colombia—selected by UN-HABITAT to showcase its incredible progress.

Colombian Ambassador Luis Carlos Villegas echoed these thoughts,  describing to the audience how the transformation of Medellín exemplifies the transformation of all of Colombia. Medellín, he said, is a global model for showing how smart urban design and innovative policies can foster social cohesion and economic development. The transformation of Medellín and Colombia has created a vibrant and expanding new middle class in the region with rising income levels. Sixty-three percent of Colombia’s population lived under the poverty line in 2000; today, that number has been cut in half. By the end of this decade, less than 15 percent of Colombians will live in poverty.

The ambassador’s remarks reinforced one of the event’s larger messages, which is that Latin American urbanization is both a net positive for the region and an example for the rest of the world. The event’s two panel moderators, Filiep Decorte chief technical advisor of UN-HABITAT and Jason Marczak, deputy director at the Adrienne Arsht Latin America Center, framed questions to their panels within this larger context.

Building cities that are economically and socially inclusive emerged as one of the dominant themes of the event, and is the core theme of the upcoming World Urban Forum. Despite Latin America’s strong progress in building an urban middle class, “75 percent of people living below the poverty line live in cities” in the region said Javier Leon, principal specialist of housing and urban development at the Inter-American Development Bank. Latin America’s challenge is two-fold, Leon explained. On one hand, there is a deep need to focus primarily on projects lifting citizens out of poverty; at the same time, however, municipal leaders must answer the calls of the emerging middle class in many countries that are demanding better governance, services, and infrastructure.

Jaana Remes, principal at the McKinsey Global Institute, believes that despite the new and edgy innovations surrounding technology and urban development, “getting the basic structure [of the city] right is actually more critical to the least fortunate than anything else.” The basic configuration of the city makes the biggest impact on daily lives. Transportation infrastructure determines commute times and job viability, for example; land distribution policies establish the housing options and pricing available for impoverished neighborhoods. All panelists acknowledged the necessity of building better infrastructure and other core urban services. If we are to successfully scale such interventions, said Michael Metzler, acting director of development credit authority at USAID, we need to find the investment capital needed, and the only way to do that is to finance municipal investment from the private sector through innovative mechanisms that attract such capital, such as those provided by his office at USAID.

This public-private partnerships (PPPs) idea emerged as a core theme at the event. PPPs can be vehicles for dramatically affecting the lives of city inhabitants worldwide. “There’s an explosion of interest in cities on the part of businesses,” said Pam Flaherty, president and CEO of Citi Foundation and director of corporate citizenship and sustainability for Citi. However, PPPs must ensure mutual benefit for all involved. The key, according to Alonzo Fulgham, vice president for strategy and sustainable international development at CH2M Hill, is constant experimentation and a willingness to do the hard work involved in building successful partnerships between local governments, the local private sector, communities, and foreign investors. Such partnerships are not easy, but are absolutely necessary if we are to scale the genuinely innovative solutions. Other panelists echoed these thoughts, arguing that urban innovation often is an incremental process that proceeds day by day and is a constant learning process. Nicholas You, chair of the World Urban Campaign Steering Committee and special advisor for the Guangzhou Institute of Urban Innovation, explained, “It’s a complete mind shift; the old models don’t work anymore. All of our planning that comes out of school, and our planning from Europe, is planning in stable situations. We’re dealing inherently with unstable situations [with explosive growth across much of the world]. People will move from one city to another in five years. A city can die in ten years. Another city can quadruple.”

The challenge now is to create a better understanding of how public-private-philanthropic partnerships work and to maximize their impact through finding ways to scale insights from successful PPPs. “It’s a very, very slow process” that must take into account complex aspects such as diverse cultures, languages, and communication systems, said Ana Marie Argilagos, deputy assistant secretary for international and philanthropic innovation at the US Department of Housing and Urban Development. Stakeholders must invest in the conversation and the learning processes that build an effective partnership, while still allocating resources and time for local government needs. Fulgham added, “It’s all about local governance . . . building smart cities starts from understanding local realities.”

The Adrienne Arsht Latin American Center briefing, Urban Innovation in Latin America, details some of the challenges that were outlined at this event, and highlights the transformative innovations pioneered in Latin America that are shaping the global dialogue on urban development.