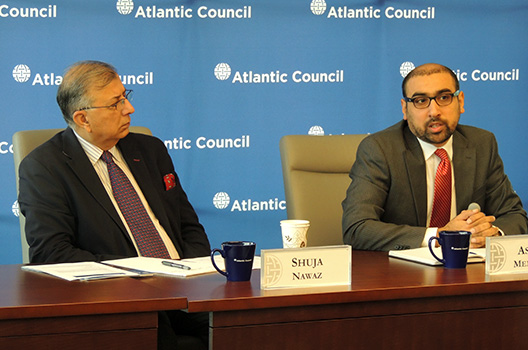 Asif Memon, an associate fellow at the Sustainable Development Policy Institute, looks at federalism in Pakistan because of constitutional and legislative changes undertaken by the South Asian country in recent years. Specifically, in 2010 Pakistan adopted the 18th amendment, bringing substantive change in organization of the government and transformed the policy landscape. The National Finance Award of 2009 was also a huge step forward in terms of Pakistani gridlock and politicking. These developments have given provincial governments in Pakistan more responsibility and a greater share of state revenue.

Memon, currently serving as one of just two US-Pakistan Program Exchange Fellow from Pakistan, spoke at an Atlantic Council roundtable during his research exchange visit to the United States. He argues that Pakistan has embarked on a new experiment with its federal structure, and who decides how money is spent and what it’s spent on.

This year the government announced a plan to try to create a national health insurance scheme, and Memon believes it is an interesting time to look at American federalism, specifically the example of governance and federalism in regards to the Affordable Care Act (ACA). Unlike many federations — where federated units decided to organize in a unit — Pakistan is embracing federalism as an afterthought.

Thirty three years of Pakistani history have been under military rule, which undermined provincial authority due to the centralized nature of military operations. The federal government in Pakistan has always had control over revenue generation and provincial governments have never had a history of collecting taxes. The policy shifts caused by the 18th amendment and the National Finance Award legislation have empowered provincial governments and allowed them for the first time to assess priorities and operate under increased financial autonomy. The current discourse of federalism in Pakistan can be split into two categories:

Memon considers the latter argument to be the result of a national discourse in Pakistan on an ethnic linguistic boundaries and nationalism. Each four provinces have a different political party in power, and a lot of their appeal among their population has to do with ethno-linguistics.

Memon observes genuine problems with provincial capacity, as exemplified by especially local responses to natural disasters and academic curriculum development. He sees political fragmentation among four provinces of Pakistan. He observes a perception among Pakistanis that the central government is hungry to snatch up power away from the provinces.

Asif Memon also sees an increasing calls at the local level for local governments, first established under the rule of Gen. Pervez Musharraf, to be reinstated. Each province currently has a bill pending, or through their local parliament, for reintroduction and implementation of the local government system. However, provincial leadership and bureaucracies do not want local governments installed.

Flux in the Status-Quo:

Pakistan is currently going through a lot of demographic and economic flux. The population is relocating and shifting towards urban centers. This is probably a result of natural disasters, increased militancy, and people seeking economic opportunities.

The 2013 Provincial elections have installed a completely new set of legislators in provincial assemblies, with incumbents taking heavy losses.

Memon says it has become fashionable for representatives, not from Punjab, to call for Punjab Province to be broken up (especially the PPP), but the counter argument is breaking up Karachi becoming a separate region.

In the coming months, Memon will release an issue brief with recommendations and analysis gained from his interactions and research in the United States.