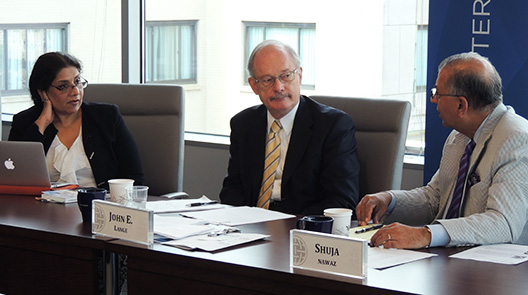 We have the money, science, and political will but the [polio eradication] program design is flawed.” A majority of the world has overcome polio, a once highly prevalent disease, yet Pakistan is one of just three countries where the disease remains endemic—and it poses a threat to polio-free countries around the world. After nearing almost complete eradication in 2004, the number of children affected with polio in Pakistan started rising again in 2006-07, with 77 cases reported in 2014. According to Dr. Samia Altaf, former acting director and senior advisor of the office of health at USAID Pakistan, Pakistan’s difficulties in eradicating the disease stem from faults in the structural design of programs run in the country. Dr. Altaf shared her expertise and prescriptions with Amb. John E. Lange, United Nations Foundations Global Health and Diplomacy Senior Fellow, at an Atlantic Council’s South Asia Center panel on Pakistan’s Polio Fight.

Dr. Altaf maintained that polio eradication programs in Pakistan are “inappropriately designed and unresponsive to the contexts of entities involved.” The country possesses the technical, financial, and organizational support from the international community that is necessary to control the disease. Yet, she argued, the missing component is contextual understanding, and regard to the social diversity of the country. Implementation of campaigns needs coordination at the federal, provincial, and local level, with attention paid to each individual disseminating vaccines. Myths and misunderstandings about the disease are also responsible for Pakistan’s failure to prevent the spread of polio. This requires more concerted, detailed, and widespread awareness and advocacy campaigns.

Among the Pashtun population living in urban areas of Karachi, Dr. Altaf shared, 40 percent are not even aware of a disease called polio—though they see its spread and symptoms among their children. She also mentioned research conducted by UNICEF, which cites about 50 percent of Pakistanis who know of the disease do not know that a vaccine exists. Dr. Altaf noted that awareness campaigns often utilize brochures and leaflets, which fail to reach many primary caregivers due to high illiteracy rates in female and rural populations. Moreover, major work needs to be done to rectify misconceptions and violence that resulting from the United States’ use of a medical doctor leading to the 2011 Osama Bin Laden raid.

Amb. Lange stated that the world is approaching the complete eradication of polio. “From almost 1000 cases a day in 1988 to a few hundreds a year, we have come a long way,” he said, “but it is very hard to finish the job.” Of the three countries where polio remains endemic, Pakistan is the only country where cases of polio increased in 2013 and 2014. Amb. Lange expressed optimism that the recently imposed international travel restrictions on Pakistan will serve as a wakeup call for the country to pace up its efforts against the disease. Shuja Nawaz, director of the South Asia Center and moderator of the panel, argued that the whole country remains “hostage” to strict travel restrictions and a bad reputation for a problem concentrated in North Waziristan. The region presents major difficulties in administering the vaccine but a collaboration military and civilian efforts in the region could yield major progress for the whole country.