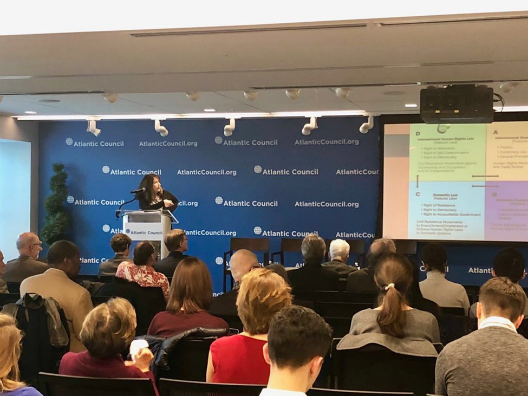 On January 25, 2018, Dr. Mathew Burrows, director of the Foresight, Strategy, and Risks Initiative in the Atlantic Council’s Scowcroft Center for Strategy and Security, welcomed the International Center for Nonviolent Conflict (ICNC) for the launch of their latest monograph “People Power Movements and International Human Rights: Creating a Legal Framework.” Dr. Maciej Bartkowski, a senior director of education and research at ICNC moderated the event. Dr. Bartkowski spoke of the evolution of this monograph series since its initial launch in 2015. The monograph’s author, Dr. Elizabeth Wilson, a visiting scholar from Rutgers Law School, presented the core arguments to the audience.

Dr. Wilson began her presentation with a basic aim, one that spoke of building a bridge between human rights law and civil resistance, though acknowledging that they share little crossover. The main, as well as opening problem she presented, was: where do international human rights come from? Is it vested in the people or the sovereign state? Dr. Wilson explained that, while the power to make a domestic law comes from the people and flows into the state, in international law, the state instead maintains sovereignty, while the people are granted with a limited power of indirect influence. Dr. Wilson found that people not having the power to make international law is extremely problematic, considering they can be both protected and prosecuted by it.

So, where do international human rights come from? Dr. Wilson argued they are derived from the thought of natural law that the universe created, and that there is a general understanding amongst human nature. This broad definition can be perceived as incoherent, perhaps justifying intervention on behalf of the sovereign state.

Dr. Wilson continued, describing that her monograph would take a people-centric approach, redefining natural law instead as people power, not as an absolute term but in a relative, constructivist sense. She expressed that the true source of human rights is within people power movements, since treaties that are often composed to satisfy human rights do not encompass all the rights that are and could be claimed by people power movements. Instead, human rights treaties can be argued as barring and cautious, limiting what the people are able to achieve. However, this is not to say human rights are created solely through movements in general. Dr. Wilson stressed that there is a need to identify which movements are really helping the people-centric cause, primarily those who exhibit nondiscrimination, nonviolence, nonrepression, and nonexploitation. She reminded the audience that it is important to remember that a reformist people power movement does not have the end goal to overthrow the state, but just to make it better for all those who inhabit it.

Following Dr. Wilson’s presentation, a panel discussion began with of Dr. Sean Murphy, the Manatt/Ahn professor of international law at the George Washington University Law School; Dr. Elizabeth Wilson; Dr. Maria Stephan, director of the US Institute of Peace’s program on nonviolent action; and Dr. Maciej Bartkowski. The discussion focused on how to differentiate the “good” movements from the bad and how national security fits into the puzzle of people power movements. Dr. Murphy noted it is not good enough that these people power movements are able to influence states and other international movements to make laws emerge, that instead we need to be thinking about these movements as capable themselves of making law. Dr. Stephan commented on what she called “a secondary right to the primary right.” She claimed that those on the outside have the right, and maybe even the duty, to provide assistance to those experiencing a people power movement.

Following the panel discussion, Dr. Bartkowski then opened the panel up to questions from the audience. Several questions centered around the theme of human rights of the past and present.

Image: As a part of the ICNC’s monograph launch, Dr. Elizabeth Wilson presented her core arguments behind the concepts of people power movements and international human rights.