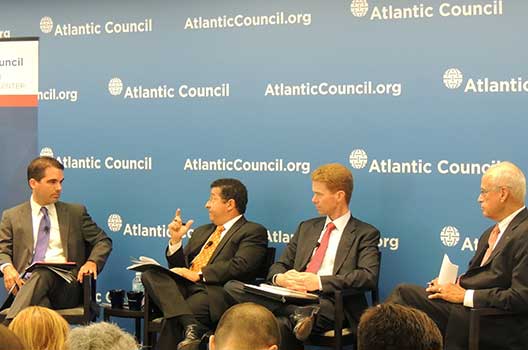 Goldwyn presented an initial overview of the report by addressing his and co-author Cory R. Gill’s major findings — and the common misconception about its focus, Petrocaribe. The Venezuela-backed oil alliance does not distribute discounted oil to member countries but rather allows them to obtain flexible credit terms by which to meet their energy needs through Venezuela crude oil and products.

Marczak started the discussion by asking the three experts how the Petrocaribe oil alliance has created a culture of dependence for Central American and Caribbean countries by maintaining heavy crude usage. Piñón discussed the credit terms by which Petrocaribe countries have been amassing significant debts as well as the financial burden that Venezuela carries by funding the program. Venezuela’s current economic woes certainly call into question the sustainability of Petrocaribe.

Bailey introduced an important element to the discussion: his co-authorship of the Inter-American Development Bank’s recent analysis, “Pre-Feasibility Study of the Potential Market for Natural Gas as a Fuel for Power Generation in the Caribbean.” Both that publication and his current examine the possibilities for natural gas in the region, a viable opportunity for cleaner-burning fuel to enter the market and power electricity needs.

Goldwyn stressed that the United States is in the rare position of having both the time and the resources to prevent an energy crisis. It should capitalize on its domestic energy boom to stabilize Central America and the Caribbean’s energy future by declaring exports of liquefied natural gas and crude oil to be in the national interest. The United States should also continue the dialogue by seizing on the Energy and Climate Partnership of the Americas framework.

All three panelists acknowledged the clear policy imperative that planning for a Central American and Caribbean energy landscape with reduced Petrocaribe influence would be beneficial for the entire region.