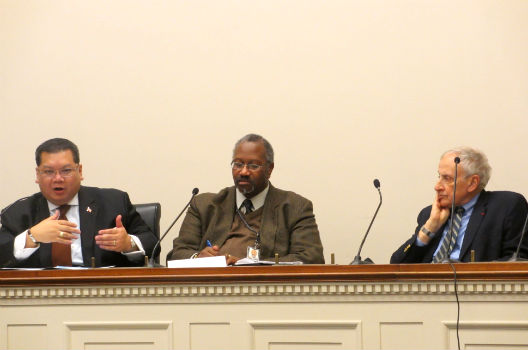 On Monday, November 30, the House of Representatives Committee on Foreign Affairs Subcommittee on Africa, Global Health, Global Human Rights and International Organizations convened a briefing on the crisis of legally adopted children in the Democratic Republic of Congo (DRC) who have been prevented from joining their new families.

Gregory Simpkins, Staff Director for the Subcommittee, welcomed participants, introduced the speakers, and moderated the discussion.

Halpern began the discussion by outlining the progression of the foreign adoption crisis in the DRC, highlighting the fact that while the adoption of many DRC children has been legally finalized, the DRC government’s refusal to provide exit authorization prevents adoptees from leaving the country. She also commented on how the delay in exit authorization contributed to a very high cost for adoptive parents who must foster and purchase local medical care for their children while awaiting approval to remove them from the country.

In his remarks, Pham underscored the DRC’s unique political and constitutional context, noting that while the country’s constitution includes presidential term limits and prohibits their amendment, President Kabila remains reluctant to relinquish power due to fears of his fate after the presidency. Pham noted the urgency of the adoption issue in light of the fact that Kabila will likely use the crisis to leverage an extension of his stay in office.

Cohen emphasized the need to search for a diplomatic solution to what is essentially a political problem created by the Congolese President.

The panel presentations were followed by a lively discussion during which several adoptive parents of Congolese children voiced their concerns about the US government’s strategy to address the issue and asked roundtable panelists to suggest policy recommendations that would facilitate a resolution.