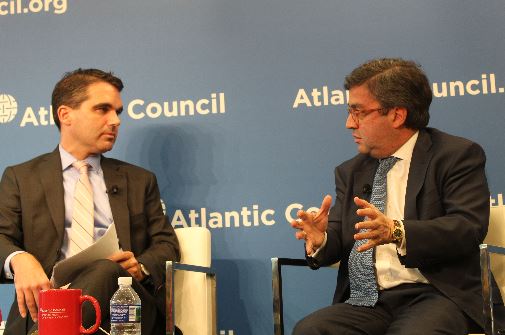 On Thursday, March 14, 2019, the Atlantic Council’s Adrienne Arsht Latin America Center convened distinguished experts and international leaders to discuss the crisis in Venezuela, as well as next steps in rebuilding the country’s economy, infrastructure, and institutions. The event served as the official unveiling of Plan País—the Venezuelan National Assembly’s detailed plan for reconstruction—on the international stage.

In his opening remarks, Jason Marczak addressed the recent blackouts in Venezuela, which have further aggravated the desperate situation in the country. “Venezuela is facing a humanitarian crisis because of the Maduro regime’s inefficiency, as well as its repressive, brutal policies,” said Marczak.

Ambassador Carlos Vecchio also condemned the Maduro regime, and urged the audience to focus its attention on mitigating the humanitarian crisis and reconstructing the country. He explained Plan País as having three pillars: 1) a political agenda for reestablishing Venezuela’s democracy, with strong institutions and fair elections, 2) economic reforms that prioritize individual economic rights and freedoms, and 3) social improvements in security, healthcare, and education that allow Venezuelans to take advantage of rising opportunities. Vecchio finished by pushing for continued investment by international organizations on Venezuela’s future, calling it a “moral imperative.”

Following Ambassador Vecchio’s remarks, Diego Area set the stage for the panel discussion on Plan País by discussing the dire economic situation in Venezuela. “In the past 5 years, we have seen a contraction of GDP by 48 percent, as well as a decrease in oil production of more than 50 percent,” said Area. He added that “the IMF is projecting that, by the end of 2019, inflation will hit 10 million percent in Venezuela. Something has to change.” Alejandro Grisanti agreed with Area’s analysis and pointed to two main factors that have led to the economic crisis in Venezuela under Maduro in the context of a sharp drop in oil prices: the elimination of economic rights for individuals, and the misappropriation of the country’s wealth. “With fewer dollars entering the country under the Maduro regime, Maduro decided to block the private sector’s access to dollars in Venezuela. For every $100 coming into the country in 2018, $98.87 went to the government, with only $1.13 dollars being sold to the private sector,” explained Grisanti. “They have destroyed the private sector, public services are suffering, and there is no way to generate wealth in the current strategy,” he added. Grisanti also stressed the important role that multilateral institutions will play in both helping to finance and advise on Venezuela’s economic reconstruction.

Paula Garcia Tufro emphasized the political and institutional crisis that has unfolded alongside the economic crisis under the Maduro regime. “We have seen a deterioration of the level of political coexistence in Venezuela, and a growing distrust in democratic institutions,” she said. Angel Alvarado built on this point by saying that “as the economic crisis has deepened under Maduro, it has led to the worsening of the political crisis. Maduro has gone beyond the limits of institutions to maintain his hold on power.”

Daniel Sierra brought Plan País into the conversation, stressing that the first 100 days of its implementation will be critical. “The key to tackling this challenge is to focus on critical sectors that are key to Venezuela’s reconstruction and are strategic at a macroeconomic level.” Sierra pointed to security as the essential component of a successful transition into democracy. “People must feel safe. Citizen security is a true challenge. We are going to need cooperation on many different fronts. This element could be what undermines the transition.”

Nancy Rivera, who has facilitated private sector investments in transitional markets, emphasized that loans from public entities would be insufficient in Venezuela’s case given the country’s financial crisis. “The only solution is getting sustainability and legal and regulatory frameworks in place so that the private sector can come in,” she said. “Economic development is more efficient and more lasting when it comes from the private sector. We are not afraid of post-conflict countries at the Overseas Private Investment Corporation (OPIC), [the US government’s development finance institution,] and if the government is willing, we will be happy to come in and provide support.”

During the second half of the event, Jason Marczak sat down with Luis Alberto Moreno, President of the Inter-American Development Bank, to close the event with a conversation on Venezuela and the IDB’s role in helping the country out of its crisis.

Moreno highlighted the two most urgent needs in Venezuela: 1) to tackle the humanitarian crisis and 2) to reinvigorate private investments. He made clear that “the engine in Venezuela has to be the private sector.” He explained that the level of investment from the private sector in Venezuela does not reach 1 percent of GDP, thus the need to increase private investments is essential to reconstructing the country and meeting long-term humanitarian needs. “This is something we have thought about a lot in our private sector arm, IDB Invest. We have been talking to some sovereign wealth funds to create special funds to invest in equity and to support the growth of the businesses in Venezuela.”

When asked about the IDB’s current relationship with the interim government of Venezuela, Moreno confirmed his continued support of Juan Guaidó and all the leaders seeking to reform their country. “Venezuela needs a change, and we are all Venezuelans,” said Moreno.