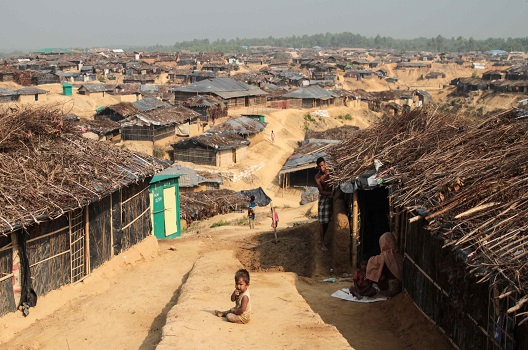 The deplorable condition of ethnic minorities in Myanmar has further deteriorated in recent years and Myanmar’s ongoing transition to democracy has been imperiled by ethnic conflict, pervasive religious discrimination, and other recurrent human rights abuses.

Once a thriving hub for trade and a major agricultural producer, the State of Rakhine in western Myanmar has more recently become better known as a crucible for an ongoing humanitarian, security, and developmental crisis. Violence between majority Buddhists and minority Rohingya Muslims — who speak a distinct Bengali dialect and have lived in Rakhine for generations — has led to an estimated one million Rohingya fleeing west for the comparative safety of Cox’s Bazar, in eastern Bangladesh, the vast majority of whom are women and children. In a campaign of sexual violence, arson, and mass murder waged by the Burmese military, or Tatamadaw, the number of Rohingya killed is currently unknown.

In a recent conversation at the Atlantic Council, former Bangladeshi Ambassador to China and current President and CEO of the Bangladesh Enterprise Institute, Farooq Sobhan, discussed the ongoing crisis on the Bangladesh-Myanmar border.

Sobhan noted that the conflict has been brewing for decades as a result of Myanmar government propaganda, rampant discrimination, and a vicious online disinformation campaign, including allegations that the Rohingya are illegal immigrants from neighboring Bangladesh. These efforts have fomented ethno-religious nationalism and violence.

On August 25, 2017, after reports that Rohingya insurgents attacked 30 police posts and an army base, the Myanmar government began what it deemed legitimate “clearance operations” against “terrorists.” In the weeks that followed, almost the entire Rohingya population – estimated at 1.1 million – sought sanctuary in Bangladesh, where most now reside in the world’s largest refugee camp.

“When Myanmar became independent, the Rohingya were recognized as an ethnical community,” said Sobhan. Yet, denial of citizenship has been a major factor that has created the humanitarian crisis. The Rohingya community has generally been excluded from Myanmar’s body politic and denied political representation while “25 percent of parliament is reserved for the army,” the ambassador said.

Because the Rohingya are denied citizenship, their freedom of movement is restricted in ways that hinder progress toward inter-communal harmony and development in Rakhine. Rohingya access to health care, education, and other critical services are also stymied.

While discussions of possible Rohingya repatriation have followed the August crisis, beginning with Myanmar signing a flawed pact with Bangladesh in November 2017, the issue of identification has been a major hurdle. “If it is the desire and intention of the Myanmar government to find a permanent solution to this crisis, then they will find a way to resolving this issue of citizenship,” Sobhan said.

Violence in June and October 2012 marked a turning point, as the Tatmadaw assault caused devastation in Rakhine state, hundreds of deaths, and the internal displacement of over 100,000 people. The displaced — the vast majority Rohingya – live in squalor and what Sobhan described as “concentration compounds.”

Living on the margins in Bangladesh, Rohingya refugees are in peril of becoming radicalized by the Islamic State, Al-Qaeda, or indigenous insurgent groups such as the Arakan Rohingya Salvation Army, which would not only have major security implications for Myanmar, but “would have a spillover effect, inevitably, in Bangladesh,” the ambassador said.

Sobhan added that the long-term challenge for Myanmar is creating sustainable economic development. Rakhine, although fertile, resource-rich, and strategically located, has suffered from underinvestment and underdevelopment because of its protracted instability. Countries, such as India and China, as well as organizations, such as the World Bank and the Asian Development Bank, should consider investment in Rakhine as a route to de-escalation and conflict resolution.

In 2012, when President Barack Obama became the first US President to visit Myanmar, he condemned discriminatory practices against the Rohingya during a speech at Yangon University. His use of the word ‘Rohingya’ sparked controversy, as the Burmese government does not recognize the word. At the same time, the US government had softened sanctions on Myanmar’s government, citing other significant steps the country had made toward democratizing.

At the November 2017 East Asia Summit, President Trump pledged American support to alleviate Myanmar’s humanitarian disaster, stating that the US would support the implementation of recommendations offered by the Rakhine Commission. Then-Secretary of State Rex Tillerson referred to the displacement of the Rohingya as an “ethnic cleansing”. In May 2018, President Trump assured Bangladeshi officials that the US would support a safe and voluntary repatriation of Rohingya refugees.

To reduce ethnic cleansing and displacement, reinstating outside political and economic pressure may be necessary. Vikram J. Singh, former deputy assistant secretary of Defense for South and Southeast Asia under President Obama, notes that any efforts to hold the Myanmar government accountable for its campaign of violence against the Rohingya and other ethnoreligious minorities in western Myanmar must be part of a longer-term effort to institute democratic reform and transparency. In the same way that global economic power could be used to further democratic governance in Myanmar, it can also be used to punish those who are responsible for some of the most brutal violence in South Asia.

Singh mentions a bill introduced by Rep. Eliot Engel, the top Democrat on the House Foreign Affairs Committee, that would sanction Myanmar and Tatmadaw officials directly involved in violence against civilians, as well as prohibit American security assistance to Myanmar security forces unless the Defense Department certifies that they have made significant progress on upholding human rights. The bill could be considered as either a stand-alone act or as an amendment to the 2019 National Defense Authorization Act.

Senators John McCain (R-AZ), Ben Cardin (D-MD), and members of the Senate Foreign Relations Committee have introduced a similar bill, the Burma Human Rights and Freedom Act, which was voted out of committee unanimously. The bill’s fate is unclear – while Senate Majority Leader Mitch McConnell (R-KY) has condemned the ongoing violence in Myanmar, and has previously supported sanctions against the Tatmadaw, he has also expressed concern that overbearing American criticism and pressure could reverse democratic gains made by Myanmar’s civilian government.

Congress could also help expose the role that social media and disinformation have played in inciting ethnic violence in Myanmar. This April, when Facebook CEO Mark Zuckerberg testified before the Senate Judiciary Committee, Senator Patrick Leahy (D-VT) confronted Zuckerberg on Facebook’s role as a “breeding ground” for hate speech against the Rohingya, a conclusion also made by UN investigators. Any thorough investigation, Congressional or otherwise, of ongoing atrocities in Myanmar must account for the role that social media has played in facilitating violence.

As reports grow of escalating violence within Myanmar, of deplorable conditions in Rohingya refugee camps, and of the enduring traumas of physical and sexual violence that the Rohingya continue to experience, the chances of a resolution in Myanmar continue to dim in an already dark situation. Further, reports of escalating violence in other regions of Myanmar, such as Kachin State, continue to fester. With most eyes on China and North Korea, Congress has the opportunity to elevate the human rights situation in Myanmar by holding those complicit in atrocities accountable.

Masoud Mostajabi is an assistant director with the Atlantic Council’s South Asia Center. Follow him on Twitter @MMostajabi1.

Sachin Mathur is a former Congressional Relations intern with the Atlantic Council. Follow him on Twitter @sachmath17.