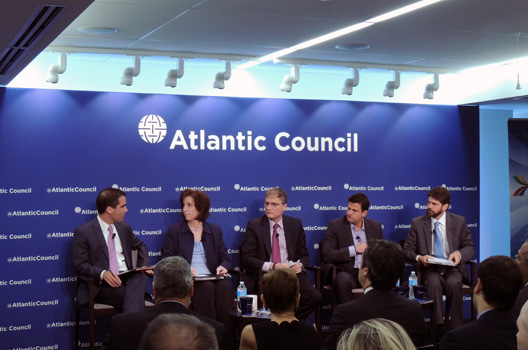 After 18 months of tension following the revelation of a US surveillance program directed at the Brazilian government, President Dilma Rousseff’s upcoming visit to Washington on June 30 marks an important shift toward reengagement for the United States and Brazil. The Presidents are expected to speak about a wide range of political and economic issues, from Venezuela and Haiti to scientific cooperation and trade, which have the potential to strengthen the bilateral relationship and produce tremendous benefits for both countries.

On June 19, the Adrienne Arsht Latin America Center, in participation with the US-Brazil Business Council, hosted the event, President Rousseff’s Visit: Photo-Op or a New Era for the US and Brazil? After opening remarks by Peter Schechter, Director of the Arsht Latin America Center, US Assistant Secretary of State for Western Hemisphere Affairs Roberta Jacobson delivered a keynote address in which she described a number of already-successful examples of collaboration between the United States and Brazil – such as Brazil’s Scientific Mobility Program and the Partnership for the Development of Aviation Biofuels. Jacobson also listed several areas in which greater cooperation could yield fruitful results, most notably in combatting global climate change and increasing the quality of education.

Marczak started by asking the panelists about the current status of the US-Brazil relationship and the opportunities for strengthening that relationship at the June 30 meeting and beyond. Sennes suggested that there is a lack of understanding between Brazil and the United States about each other’s interests that must be overcome to foster a strong relationship. Meanwhile, Jacobson and Belli agreed that the meeting represented the possibility of a “new chapter” in US-Brazil relations, with ample possibilities for further collaboration in trade, education, science and technology, defense, climate change, and international issues.

Marczak then turned the conversation toward stakeholders’ goals for the meeting. Long noted that the private sector would benefit from agreement on tangible methods of cooperation with timetables for implementation and metrics for measuring success. He stressed the value of incorporating information technology into the entirety of the US-Brazil bilateral agenda in order to increase the efficiency and effectiveness of cooperation. Jacobson remarked that she hoped the meeting would serve as both a symbolic demonstration of the stability of the US-Brazil relationship to the public and as an impetus for accelerating progress on bilateral issues.

The panel closed with a discussion about the impact of the growing economic ties between Brazil and China on the US-Brazil relationship. All of the panelists stressed that Brazil’sinternational engagement must be envisioned not as “China or the United States” but rather as”China and the United States.” Sennes stated that, while the Brazil-China bilateral agenda isgrowing, it does not and will not have the same level of strategic importance to Brazil as its relationship with the United States.