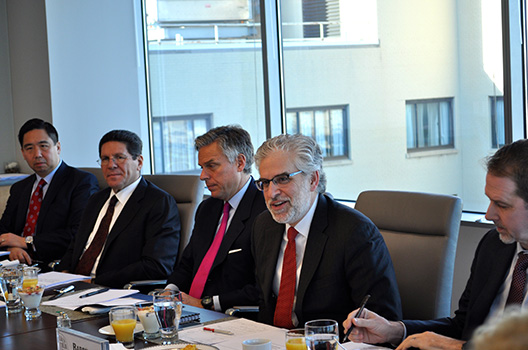 The breakfast discussion focused heavily on how to define the term “strategy”, and the importance of ensuring the word is not used simply because it sounds profound, but that it actually has meaning behind it. Strategy is a way from getting from a world that we know and understand, to more unknown territory, and it is especially important at this juncture because America’s role in the world is not clearly defined. Furthermore, in order to have a successful strategy, one must start with a clear picture of end-goals and objectives.

The discussion also provided an opportunity to preview the new paper written Barry Pavel and Peter Engelke entitled “Dynamic Stability”. Comments from breakfast attendees followed an overview of the paper, and focused on how to ensure a coherent national strategy with fractured domestic politics, the importance of the United States leading in a multi-polar, and ever-changing global landscape, and how to create a strategic document that can be understood by everyone, rather than just foreign policy professionals.