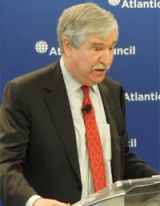 Reestablishing an American diplomatic presence in Iran is in the national security interests of the United States and would not constitute a reconciliation with Iran, argues a newly released Public Affairs Alliance of Iranian Americans (PAAIA) report, “Reestablishing a US Diplomatic Presence in Iran: Advancing US National Security and serving American Citizens.” This presence, given the tumultuous political conditions and vivid memory of the 1979 hostage crisis, would be limited, incremental, and reversible.

At a panel at the South Asia Center, author of the report Ramin Asgard suggested this could take the form of interests sections reporting on public affairs, and political and economic issues. Additionally, the United States stands to benefit hugely from enhanced American citizen services, currently being facilitated by third parties, including passport issuance and renewals, voter and income tax assistance, support for Americans arrested or detained aboard, etc.

Fellow panelist and former US Deputy Assistant Secretary of State for Iran, The Hon. John Limbert, agreed the citizen services need improvement, citing the complex Iran visa process, and a diplomatic presence is undoubtedly necessary. However, Limbert urged caution. Despite recent breakthroughs in diplomacy, the internal political situation in Iran remains sensitive. Iran’s political and religious leaders are often seen contradicting each other in media.

As President Hassan Rouhani recently expressed readiness of Iran to engage with the world, Supreme Leader Ali Khameni vocalized pessimism regarding nuclear talks and called for “economic jihad” to reduce the impact of sanctions. Whether in a limited diplomatic capacity or not, Limbert warns, in the current climate “our people may become pawns in a contact sport.”

The report cites past adversarial relationships during which the United States maintained or reestablished a diplomatic presence—including the USSR, China, Vietnam, Cuba, and Libya—despite strains and concerns. Further, the security conditions that US citizens would face in an Iran Interests Section would “pale in comparison to the constant and severe risks associated with the types of deployments the Foreign Service and other civilians posted overseas have routinely faced over the past decade.”

The PAAIA poll, on which the report was based, suggests a majority of Iranian Americans support an American presence in Iran. Panelist and PAAIA Director for government affairs and policy Morad Ghorban stated that most Iranians are highly informed on Iran’s current social and political climate through personal links sustained through the 30 year diplomatic freeze, and possess a desire to facilitate diplomacy. In fact, the real opposition to reestablishing an American presence in Iran, Moderator and South Asia Center Senior Fellow Barbara Slavin argued, comes from within Iran rather than the United States. Need assurance from government and Supreme Leader that 1979 will not happen again, and a state where every misstatement of misstep doesn’t evoke memories of 1979.  Limbert suggested that the US and Iran must look for yes-able measures, urging the two parties to avoid holding everything “hostage to the nuclear deal,” but searching for smaller steps on which to progress.