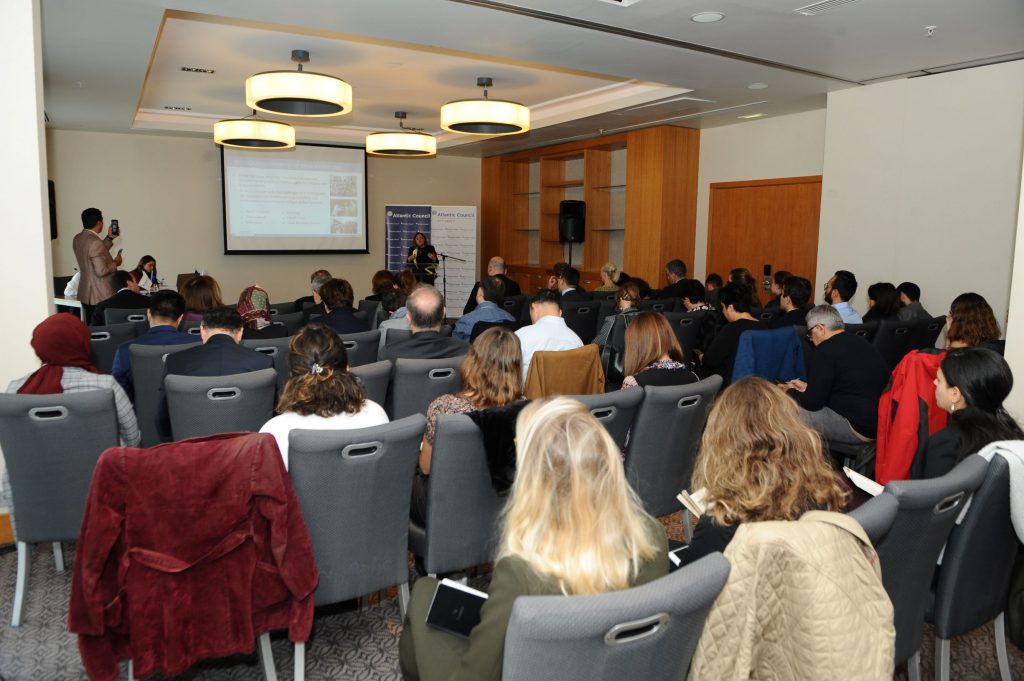 “The refugee crisis has totally been invented”, said Laura Batalla. As the co-author of the report entitled “Toward Long-Term Solidarity with Syrian Refugees? Turkey’s Policy Response and Challenges”, published by the Atlantic Council IN TURKEY (AC), Batalla emphasized the misperception among Europeans about Syrian refugees in her speech during the presentation of the report in Istanbul this week.

As an example, she showed a recent poll conducted in Italy according to which an average Italian believes that migrants compose 30 percent of the country’s population. Yet the actual number is only 9 percent!

After all, it is exactly this misperception which has reshaped the entire political spectrum in Europe. As AC President and CEO Frederick Kempe underlined in his speech in the same seminar, populist far-right parties have fully exploited this anti-immigration sentiment of the people toward migrants. Today, the refugee crisis is the basis of not only domestic politics –as most recently seen in Germany’s regional election results in Bavaria and in the Brexit spiral in Britain- but also of multinational institutions. The expected rise of far-right parties in the upcoming European Parliament elections in May 2019 is just one example among many.

Perception plays a big role in Turkey’s sociological and political sphere as well. Hosting the world’s largest refugee population since 2014, Turkey has displayed a successful “refugee policy” thanks to the generous efforts of the public and government hand in hand. The Turkish state has spent 30 billion dollars since the beginning of the Syrian war for the 3.6 million registered Syrian refugees in the country – an unprecedented number in the history of refugee movements. This number is more than threefold the whole number of refugees throughout all of Europe. In addition, communal tension between local populations and refugees has so far not reached worrying levels at all.

Yet the management of this migration process so far was based on the perception that refugees are “guests” to be accommodated only temporarily in Turkey. However, the longer the stay of immigrants has become, the attitude of the Turkish public toward refugees appears to be hardening.  A recent study released by Istanbul’s Bilgi University found that 86 percent of Turks want “Syrians to return after the war is over”. This compares with a 2014 poll that showed only 38 percent of Turks agreeing with this statement. The u-turn in public opinion is due to the fact that Turks have come to realize that the stay of Syrians is to be permanent. Laura Batalla confirmed in her presentation that almost 80 percent of Syrian refugees are willing to stay in Turkey.

This awareness is coupled with the high birth rate among migrants and the “preferential treatment” they receive from the Turkish government since registered Syrians receive government stipends and easy access to public services such as education and health. After all, these two factors have increased the rising antagonism toward refugees within society.

According to Fatma Şahin, the mayor of Gaziantep -a south-eastern Turkish city 30 miles from the Syrian border which hosts the the fourth largest amount of refugees amng Turkish cities- Turkey has already reached “the limit of its capacity of digestion”. Hence the need for an urgent shift from temporary policies to permanent and long-term ones on migration.

The “Antep model” which Şahin has developed and executed in Gaziantep since 2014, could serve as a role model not only for Turkey but the wider region since it has successfully given way to harmonious co-habitation. She has invested largely on health and education, having been able to enroll all of the Syrian children at school age in Antep since 2014. The first “migration directorate” within a municipality structure in Turkey was also built under her leadership which sped up the response to the needs of refugees. Only such an integration model could enable the integration of migrants into society.

Yet when speaking about a country as a whole or the wider region, we definitely need burden sharing. Domestically, the public and private sectors need to cooperate with civil society and the media to tackle the problems of refugees in the long-term. At the same time, international donors play a central role in this problem such as the European Union (EU), which is the largest multinational contributor to refugees in Turkey.

Developed countries including those in Europe have adopted a security-oriented approach rather than a humanitarian one toward refugees. Yet the integration of Syrians is critical also for national security since their exclusion would increase radical movements and ghettoization. This is only one of many other reasons why national governments have to shift from short-term to long-term policies in order to integrate refugees into society. Otherwise, we all will serve to radicalize these masses, which in the end would endanger the existence of our own society.

As Frederick Kempe put into words, “Migration is a phenomenon which has existed throughout all human history”. This is exactly why it has always been a test for humanity, exposing its darkest sides. The remedy does not seem to be that complicated. We just need to look at the future together.