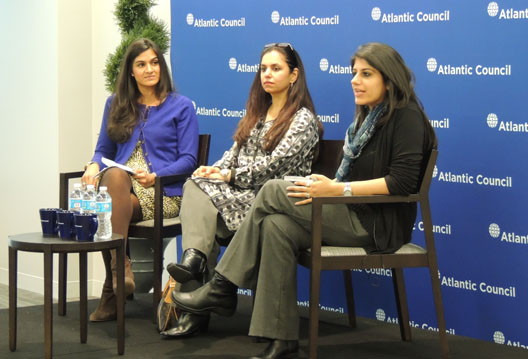 “Poverty affects everyone in the household–the young, the old, the women, the men. So it is everybody’s responsibility to resolve it,” stated Kashf Foundation’s Managing Director Roshaneh Zafar, reflecting on conversations with Grameen Bank Founder Mohamed Younus during the formative stages of Kashf Foundation. “Gender issues are everybody’s problem. They are not just the problem of women.”

Zafar is the managing director of Kashf Foundation, Pakistan’s leading wealth management company for low income families that  is working to build a poverty free and gender equitable society. Recognizing the potential impact of media in this sphere, Kashf Foundation produced a 15 episode television series and later a feature film, entitled Rehaii or liberation, to spread the message of gender equity in Pakistan. Zafar and Zainab Saeed of gender equity in Pakistan. Zafar and Zainab Saeed, Manager of Internal and External Engagement, Kashf Foundation, spoke at the Atlantic Council’s South Asia Center for a screening of the film, followed by a panel discussion on the Foundation’s progress on creating a new narrative in Pakistan. 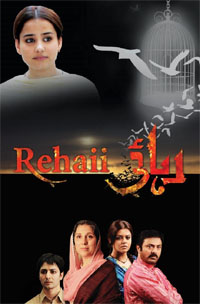 “We realized the need to mix education and entertainment, “said Zafar, explaining Kashf Foundation’s expansion from finance to media. “We are creating ‘edutainment’.”

Kashf Foundation’s move to media is not the first such transition for the organization. As Zafar explain, the Foundation originally only hired women and worked with women clients only. But Zafar quickly realized that isolating women created more problems and disconnectedness in society. Recognizing the close interconnectedness of families and society and the sweeping impact of economically empowering women, the Kashf Foundation expanded its approach to “financial services for all.”

“We did not want to have a mutually exclusive process,” Zafar explained, “We want to bring men in this process because that is how we ensure change is sustainable.”

Indeed, the film Rehaii shows the impact of women’s issues on the whole family and society, and also exhibits a strong theme of justice and reformation. Rehaii, mirroring Kashf Foundation’s work, illustrates the links between the economic instability of women to numerous other struggles for women and families. Though somewhat dicomforting, particularly to a Washington DC audience at the Atlantic Council,  the film also highlighted reformation and acceptance as a critical pieces in altering harmful social constructs.

“Change is possible. People can change and people can change their attitudes. If you’ve done something that’s wrong, there is room for redemption” said Saeed, discussing Kashf Foundation’s other front for changing mindsets, which includes gender and financial management trainings throughout Pakistan.

Kashf Foundation is working on many fronts to build a poverty free and gender equitable society, but the use of media—including film, television, theater, and perhaps even the radio in the near future—has expanded the reach and effectiveness of the Foundation. Through this diverse medium, Kashf Foundation reaches diverse regions and socioeconomic groups, and isolates the gender issue in Pakistani Society. In conclusion, Zafar described the film Rehaii’s core message, “This is the impact it has on little girls. This is the impact is has on families. This is what is does to our society. Now it is up to us to do something about it.”