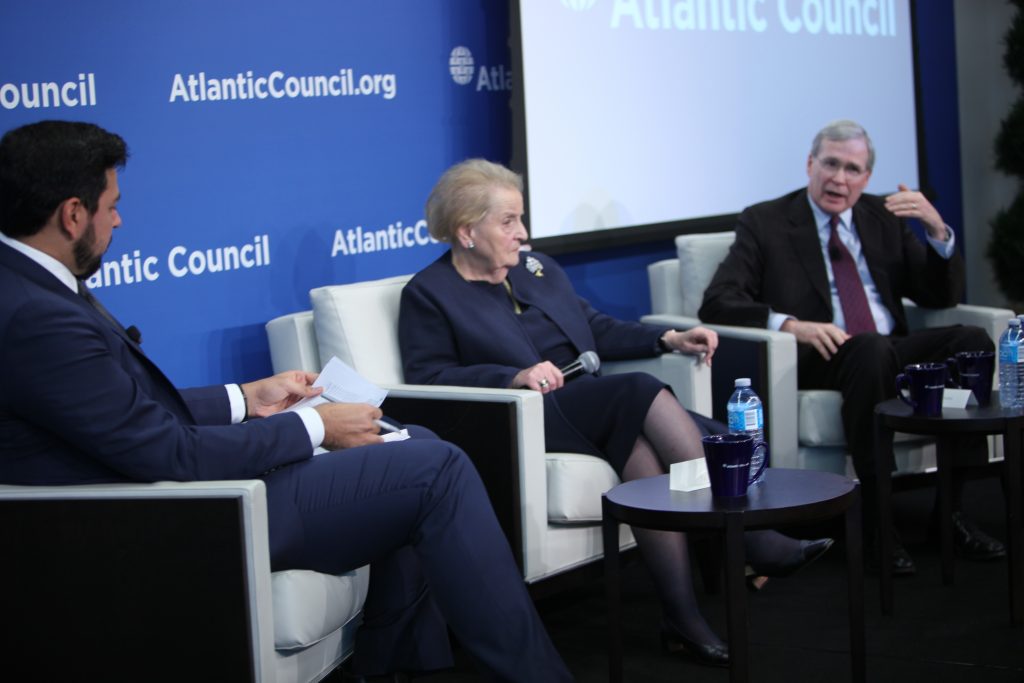 Kempe opened the event by discussing the deliberate process the Task Force underwent to hear from voices in the region. He then explained that the co-chairs’ report presents a unique approach that will lead to a better understanding of the Middle East and to a more hopeful future. He added that the MEST report has not focused solely on defining an American strategy for the region but rather a strategy for the region itself.

Albright began her remarks by highlighting the importance of the bipartisan aspect of this Task Force. She added that the report was meticulously prepared and approached with a great deal of humility. She then summarized the key findings of the report, underlining that the current crisis in the Middle East is not a crisis of the Middle East itself but rather one affecting the world. She then stressed the plethora of American interests in the region ranging from security issues to vital economic interests. Albright detailed the Task Force’s efforts to eschew short-term fixes and instead provide long-term solutions. She added that many positive things are in fact happening in the region, as some leaders have started recognizing that people, not oil, are the most important resources in their respective countries. Finally, she detailed the report’s two-pronged action agenda. The first prong focuses on winding down the civil wars, encouraging security progress, and deescalating the regional confrontation between Saudi Arabia and Iran. The second prong addresses the region’s failures in governance, and seeks to develop the region’s untapped human potential.

Hadley then discussed a new strategic approach which encourages partnership. He added that the co-chairs do not think the Middle East has the ability to solve all of its immediate security problems on its own and requires some support from foreign powers. Discussing Syria, Hadley noted that achieving a real settlement will require all parties first to face the reality that the conflict is militarily unwinnable, prompting them to come to the negotiating table in a sincere way. On Yemen, Hadley shared the report’s conclusion that the United States should press for a political settlement to end the humanitarian crisis there. Regarding the second prong, Hadley explained that the Middle East should tap the power of its people, restructure its education systems, and enact regulatory reforms that can help jumpstart economies. He also highlighted the report’s call for a development fund in the Middle East, resourced primarily by the countries of the region, but with matching contributions from outside partners, recognizing that such investment is strongly in their interests. He concluded by noting that many of the report’s conclusions align with priorities that President-Elect Trump has set out for his administration, including more aggressive action against Daesh, more robust efforts to prevent Iranian interference in Arab politics, and an approach whereby regional countries take on more of the responsibility for their own security.

In the moderated discussion, Mohyeldin highlighted the originality of their approach toward this project, particular how it took regional voices into account. Albright responded that they realized that order in the Middle East cannot be imposed from the outside and will have to come from the region itself. She added that their research was largely a compilation of local initiatives and rather than ideas from Washington. Mohyeldin then asked Hadley about public opinion in the United States and a desire amongst the public to extract the United States from the Middle East. Hadley responded that the United States has important interests in the Middle East, and that ignoring the region simply will not serve these interests. He also highlighted that the plan outlined in this report is in many ways opportune, because it matches the level of involvement that both Americans and people in the region are ready to support. He emphasized that the report does not call for any large deployments in the style of the Iraq war of 2003.

Mohyeldin then asked both co-chairs about Middle Eastern countries’ desire for reform and the possible repercussions in the region if leaders do not listen to the demands of their people. Hadley responded that several countries, including the United Arab Emirates, Saudi Arabia, Jordan, and Tunisia, understand the need for reform and have taken concrete steps to go in a new direction. He then argued that countries in the region have to heed the will of their people or risk pushing them either into the streets or toward joining terrorist organizations. Both co-chairs then emphasized the importance of bottom-up initiatives involving the people in securing the future of the Middle East; it cannot all be done from the top-down.