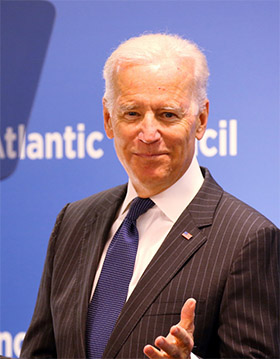 President Barack Obama will visit Poland in June for the 25th anniversary of the free elections that marked that country’s exit from its era of communist rule under Soviet domination, Vice President Joe Biden said at the Atlantic Council today. Obama’s visit to Poland comes as the US administration seeks to bolster Eastern European allies amid the transatlantic community’s confrontation with Russia over its attacks on Ukraine.


Following his visit to Poland, Obama will hold talks on the Russia-Ukraine crisis in Brussels with other leaders of the Group of Seven industrialized nations, Biden announced. Obama then will visit France for a commemoration of the 70th anniversary of the Allied D-Day invasion that began the reversal of Nazi Germany’s occupation of Europe during World War II.

As the United States and its European allies grapple with Russia’s seizure of Crimea and its backing for violent attacks in eastern Ukrainian cities, “we have a lot of work cut out for us in the very near term,” Biden told an audience of European government ministers, diplomats, and US and European policy specialists. His address was the closing event in a two-day conference at the Council on a transatlantic effort to build the undivided and free Europe envisioned by Western policymakers following the end of World War II.

The conference marked a decade since the broadest expansions of NATO and the European Union in their histories, as Central and Eastern European states became members in the years after the fall of the Soviet Union and the end of the Cold War.

In his most emphatic remark, Biden dismissed declarations by the government of Russian President Vladimir Putin blaming the tensions over Ukraine on the recent years’ inclusion by NATO of Eastern European states as members.

“Let’s be clear: the current crisis … has nothing to do with the enlargement of NATO,” Biden said. “It was born in the Kremlin. It was born in Putin’s mind.”

“What Russia has done violates not just Ukrainian sovereignty, but the fundamental principle that European borders cannot, will not be changed through political intimidation or military force. And we have to be resolute in imposing costs” on Russia, Biden said.

The United States and Europe also must help Ukraine accomplish reforms that can help meet the aspirations of its 46 million people, unfulfilled after more than two decades of independence, Biden said. The hope of Ukrainians “has not been realized, in significant part because of corruption. … This needs to be a government that exists to serve the people and not enrich the powerful.”

To strengthen Europe politically and economically, Biden called on US and European leaders to work toward a continent-wide energy market, notably for natural gas, that can be less dependent on Russia’s gas and oil supplies. And he urged completion of the agreement now under negotiation among North American and European governments to deepen economic, the Transatlantic Trade and Investment Partnership. In the efforts to build a more stable Europe, he said, the West must maintain a readiness to include Russia once the current policies of President Putin are reversed.