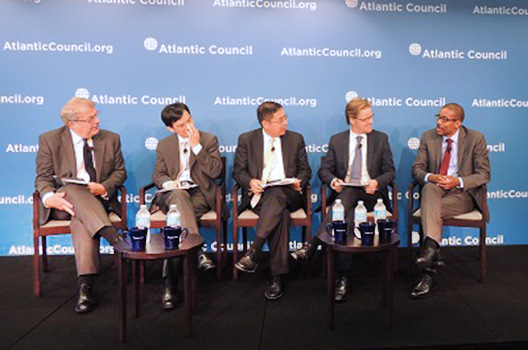 On Friday, September 18, the Transatlantic Finance Initiative of the Atlantic Council’s Global Business and Economics Program hosted a high-level panel to discuss the internationalization of China’s currency (Renminbi) in today’s volatile markets and its significance for foreign, regulatory, and monetary policy both in Chinese and world markets. The event marked the conclusion of a series of events for the global launch of the report Renminbi Ascending: How China’s Currency Impacts Global Markets, Foreign Policy, and Transatlantic Financial Regulation, sponsored by the Atlantic Council, Thomson Reuters, Standard Chartered, and the City of London Corporation. The report by Chris Brummer, C. Boyden Gray Fellow on Global Finance and Growth, as well as Project Director and creator of the Atlantic Council’s Transatlantic Finance Initiative, evaluates the increasing role of the Chinese currency in international payments and finance.

Governor Huntsman opened the event with brief remarks, noting that the event came at a critical moment with President Xi Jinping’s upcoming visit to Washington as well as at a time where concerns about the Chinese economy and financial system had “moved from the field of philosophical discomfort to tangible threats” with China’s recent currency devaluation. Mr. Clark followed praising the report for examining the geopolitical context around the Renminbi’s internationalization as well as for its increasingly pressing policy recommendations and sharp market predictions.

Dr. Brummer introduced the report and discussed some of it observations and recommendations, including the need for more supervision and transparency throughout the Chinese financial system and more clarity in regulatory policy, before handing over to Shuang Ding for a brief examination of China’s current economic and financial situation in light of the recent stock market crash and currency devaluation. Mr. Ding emphasized that the recent devaluation of the Renminbi was likely motivated by a desire for the Renminbi to be included in the IMF’s special drawing rights (SDR) and would therefore promote further internationalization of the currency even if it represented a short-term economic setback.

The panelists largely agreed that while there were significant short-term economic challenges, there was also reason for some optimism about long-term growth in China. In discussing the Renminbi and its internationalization more specifically, the panelists noted that the devaluation had provoked a disproportionate response from financial markets, as China still has significant currency reserves, desires currency stability, and is beginning to liberalize its capital account. Dr. Brummer also noted that the reaction of markets to the devaluation was in fact a sign of the RMB’s ascendance in global payment systems, though cautioned that SDR inclusion should be accompanied with further regulatory reforms. The panel concluded with participants noting that the process of internationalization is a long one that the Chinese government is attempting to manage carefully, and that China is likely to play an increasing role in financial systems both regionally and globally.

The report, Renminbi Ascending, can be downloaded here.

A webcast of the event can be watched here.