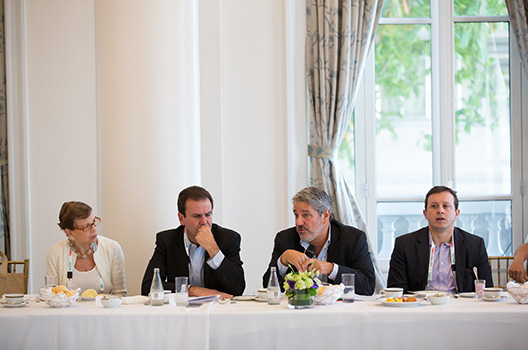 Rio de Janeiro Mayor Eduardo Paes laid out his plans to bring investment to Rio, prepare the city for the 2016 Summer Olympics, and tackle climate change at a private high-level breakfast hosted by the Atlantic Council’s Adrienne Arsht Latin America Center on the sidelines of TEDGlobal 2014 in Rio de Janeiro.

Since 2009, Mayor Paes has spearheaded initiatives to ensure that Rio’s renaissance creates a positive legacy for all its citizens. As Olympic mayor, he is capturing interest to bring investments that will improve current infrastructure and management issues and to use the Olympics as a platform to improve Rio. He currently serves as the chair of C40 Cities Climate Leadership Group, a network of the world’s megacities taking action to reduce greenhouse gas emissions.

“Our mission is to highlight the new Latin America and Mayor Paes is emblematic of this transformation. He has worked tirelessly to make one of the largest cities in the world more accessible, more sustainable, and—as he famously says, ‘smarter,'” said Arsht Center Director Peter Schechter. “Tackling challenges from improving urban infrastructure to minimizing environmental impact, Mayor Paes sets the gold standard for municipal management in Latin America but also globally.”

“Over the past six years as Mayor of Rio de Janeiro we have substantially transformed this amazing city. It is great to see that the world increasingly recognizes these achievements,” said Mayor Paes. “I am thrilled that the Atlantic Council’s Latin America Center is helping me shine the global spotlight on the new Rio and is highlighting transformations occurring across the region through their modern approach.”