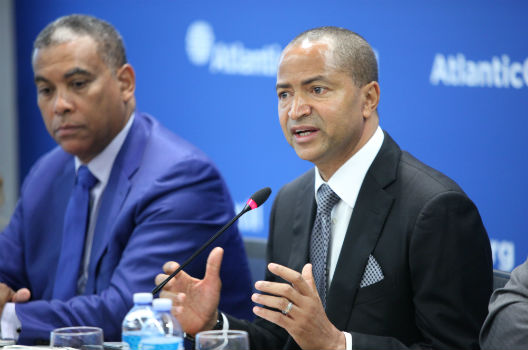 On Wednesday, July 13, the Atlantic Council’s Africa Center hosted Moϊse Katumbi, joint opposition candidate for the presidency of the Democratic Republic of the Congo (DRC) and former governor of Katanga Province, for a roundtable discussion on the current political situation in the DRC in the lead up to what should be a constitutionally mandated transition before the end of the year.

In his remarks, Katumbi laid out his vision for the future of the DRC, focusing specifically on the reforms that are essential to good governance and economic development. He also stressed that the international community should look beyond mineral extraction in the DRC, noting the need for further investment in education and human capacity. He also acknowledged the general lack of confidence in politicians and underscored the need for Congolese political leaders to motivate young people to participate in the political system. He highlighted the importance of respecting term limits and expressed concern for President Joseph Kabila’s lack of preparations for the presidential election later this year, which are required by the Constitution. Finally, he welcomed engagement from the international community, but expressed his hope that the Congolese people alone will decide their country’s future.

A full transcript of Katumbi’s remarks can be found below in English.


Senator Edward Markey of Massachusetts, the ranking member of the Subcommittee on Africa and Global Health Policy of the Senate Foreign Relations Committee, also attended the event and spoke, emphasizing that while he endorses no particular candidate, free and fair elections are vital to the DRC’s stability, growth, and future prosperity. The senator also spoke about US interests in a democratic transition and possible measures to ensure it.

The event was attended by a large number of current and former senior US officials, congressional staff, and representatives of policy institutions and non-governmental organizations.

For more on the event, see “Congolese Presidential Candidate Urges Use of Sanctions to Bring About Democratic Change in DRC.”

This event was made possible in part through generous support from United for Africa’s Democratic Future.

Image: Right to left: Moϊse Katumbi, joint opposition candidate for the presidency of the Democratic Republic of the Congo (DRC) and former governor of Katanga Province; the Honorable Olivier Kamitatu, vice president of the G7 Coalition and member of parliament