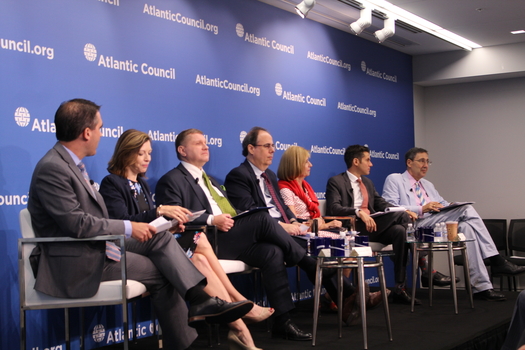 On June 20, the Atlantic Council’s Adrienne Arsht Latin America Center and its Eurasia Center co-hosted a public event to discuss the extent of Russian involvement in Venezuela, Moscow’s motivations and possible next moves, and how the United States should react. As a wave of international and domestic support for a democratic transition is sweeping Venezuela, Moscow continues to support Nicolás Maduro. Displays of military force, Rosneft’s 49.9 percent collateral of Venezuela-owned CITGO refiner, and billions in loans to the Maduro regime showcase Russia’s rooted geopolitical and economic interests in Venezuela and the hemisphere.

Senator Rick Scott (R-FL) gave opening remarks emphasizing the need for immediate action by the US and the international community to the ongoing humanitarian, economic, and political crisis in Venezuela. Senator Scott stated that, “every American needs to know what is going on in Venezuela today… It is a crisis that threatens the safety and security in the region as a whole.” His keynote served as a call to action for the US to work to counteract threats to peace and democracy in the region.

Following the keynote remarks, Jason Marczak, director of the Adrienne Arsht Latin America Center, moderated the panel discussion on Russia’s broader strategic goals and how they play out in the context of Venezuela. Ambassador Paula J. Dobriansky, senior fellow at the Belfer Center for Science and International Affairs at the Harvard Kennedy School of Government and former under secretary of state for global affairs, highlighted Russia’s desire to reconstitute the sphere of influence it once had as well as assert themselves as a key political actor in global affairs vis-à-vis the United States. She stated, “the driving principle of Russia’s actions is fundamentally to marginalize, if not, eradicate US power internationally.” Ambassador Dobriansky emphasized that the political investment in Venezuela on the part of Russia is greater than its economic ties.

Ambassador John Herbst, director of the Eurasia Center, added that the Russian government is concerned about their sphere of influence abroad as well as domestically, stating that “Putin established a concept that he doesn’t want to see authoritarian leaders fall to people rising in the streets.” There was consensus among the panelists about the role of domestic politics in Russia’s decision to get involved in Venezuela. “For Putin, it is all about regime survival,” said Evelyn Farkas, resident senior fellow at The German Marshall Fund of the United States and former deputy assistant secretary of defense for Russia, Ukraine, and Eurasia.

Konstantin von Eggert, a Russian journalist and columnist for Deutsche Welle, pointed to the significant decrease in public support for Putin’s expansive foreign policy. “Although, for now, it is a low-cost operation, there are limits to what Putin can do in Venezuela… the Kremlin will refrain from a direct confrontation in which it can lose a lot.” He explained the low appetite among the Russian public for what they see as distant crisis in a country most of them cannot locate on a map. It will be important to watch domestic conditions in Russia as the stalemate in Venezuela continues.

Mark D. Simakovsky, a senior fellow at the Eurasia Center and former chief of staff for Europe/NATO at the Office of the Secretary of Defense for Policy, discussed the evolution of relations between Venezuela and Russia. “Moscow is analyzing the limits of US power in Venezuela. I think Moscow understands that there are divisions in the [US] administration itself on how to deal with this issue,” he stated.

Francisco Monaldi, the Latin American energy policy fellow at the Center for Energy Studies and the Mexico Center and director of the Latin America Initiative at Rice University’s Baker Institute for Public Policy, spoke to Russia’s growing economic and military foothold in Venezuela. Regarding the oil industry, Russia and other oil-producing countries are benefiting in the short-term from reduced production in Venezuela. However, “if there is successful transition and the oil sector recovers, Russia stands to make a profit from that” in the long-term because companies like Rosneft manage key oil and gas fields in Venezuela. Venezuela is also attempting to diversify its military relations to gain some independence from the Cubans who have long had significant influence in the country’s intelligence and military apparatus.

In the United States, there is bipartisan support to bolster democracy in Venezuela, but there is a lack of consensus on how to address the deepening crisis and Russia’s influence in the country. Farkas recommended that the US needs to put the pressure on Maduro and Putin because “if the US doesn’t have a policy, Russia will take the initiative.” Simakovsky urged the US to think critically and act with a “scalpel not an axe” when implementing sanctions or other responses to the crisis.