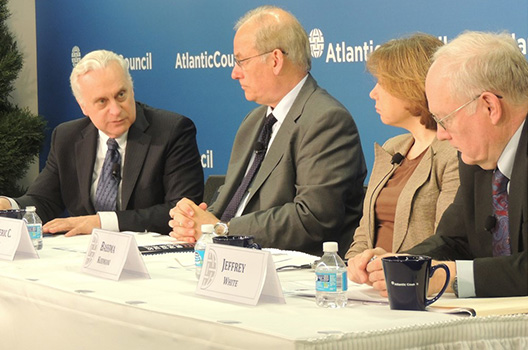 The authors presented a new way forward in order to reach sustainable peace in Syria after four years of conflict, the death of more than 220,000 Syrians, and over half of the population internally or externally displaced.

Hof stated that the United States must put the train-and-equip initiative “on steroids.” The recommended program creates a robust, three-division stabilization force of 50,000 Syrians that would be able to fight and defeat any enemy standing in the way of a legitimate and inclusive Syria. He explained that as the Syrian National Stabilization Force (SNSF) gains ground and popularity, the force will attract patriotic elements of the Syrian Arab Army and other rebel forces to fill its ranks.

Kodmani acknowledged the lack of a strong Syrian partner and therefore called for the establishment of a Syrian Advisory Task Force (SATF) composed of independent Syrians who are willing to work in a non-ideological manner while shaping a clear discourse focused on restoring law and order. The United States and its allies can rely on the SATF for its in-depth knowledge and oversight of the military situation in Syria and the country’s internal political and social dynamics to aid with recruitment and establishment of both the SNSF and a legitimate Syrian governance. In this way, the establishment of the SNSF can put an end to the current trend like that in Libya, Iraq, or Yemen where regional powers support their own agendas through funding of clients, creating an environment where the local populations’ interests are overlooked.

White emphasized that there is no political solution to the Syrian conflict unless there is a military component that can help facilitate political change. He explained that the SNSF must have the capability and means to fight their enemies in offensive missions as well as the ability to conduct defensive, humanitarian, and security missions. In order to create this force successfully, the United States and its allies must lead the initiative in several efforts, to include establishment of a no-fly zone in parts of Syria where the SNSF can operate militarily and the Syrian National Command authority can establish governance.

When asked about who would fund the establishment of the SNSF, Hof noted that many US partners in the Gulf and the West would share the financial burden. Kodmani continued by stressing that several European countries—concerned by the return of their citizens who have been fighting with extremists groups in Syria as well as the flow of refugees coming to Europe because of the conflict inside Syria—would not only be willing to take part in such an initiative but are in fact expectedly waiting for such an initiative to begin.

Ultimately, the authors argued that cooperation, engagement, and a clear coherent discourse between Western, regional, and Syrian military and political actors—and the message of commitment projected by putting the train-and-equip program on steroids—can create new dynamics on the ground, build popular appeal to the SNSF’s mission and goal, and set the stage for peace in Syria.