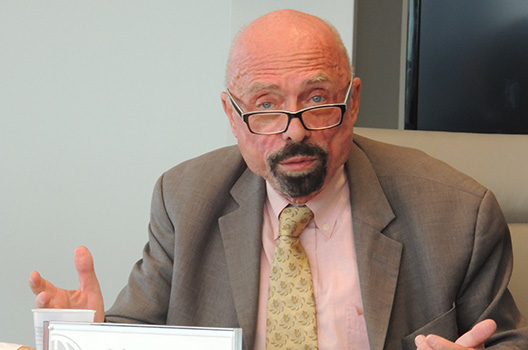 Exactly one year ago at an Atlantic Council forum, Africa Center Senior Fellow Gérard Prunier outlined the political dynamics in Sudan and South Sudan and predicted that tensions in the latter would soon lead to open conflict. Two months later, he was unfortunately proven correct: in December 2013, South Sudan began its rapid descent into a civil war that has already killed tens of thousands of people and displaced over 1 million others.

Throughout the conflict, Prunier has crisscrossed the region, directly engaging both the South Sudanese protagonists and the regional and international diplomats tasked with mediating their conflict. On October 2, he again visited the Atlantic Council’s Africa Center to brief key stakeholders and analysts on the dynamics of the war.

After a welcome and introduction by Africa Center Director J. Peter Pham, Prunier situated South Sudan’s civil war within its extended historical context, arguing that the country’s current disorder must be understood as an outgrowth of a political culture that was laid down during the Ottoman Empire’s—not the British—colonial rule. The failure of international policymakers to appreciate the complex Eurasian politico-cultural roots of South Sudan’s crisis, and to regard it instead as a clash between various ethnic groups, has greatly hindered diplomatic efforts to resolve the conflict.

Prunier then spoke at length about the current dynamics and regional components of the war. He offered an unoptimistic assessment that the recent lull in fighting is a temporary halt forced by massive rains, and acknowledged that there are major structural obstacles to making and sustaining peace in South Sudan—not least among them, the international community’s continued failure to correctly comprehend the conflict. Surprisingly, however, Prunier also cautioned against despair: if the United States and its partners can summon the will to invest massively and consistently in strengthening local administrations, security sector reform and infrastructure, the South Sudanese nation may still be salvaged.