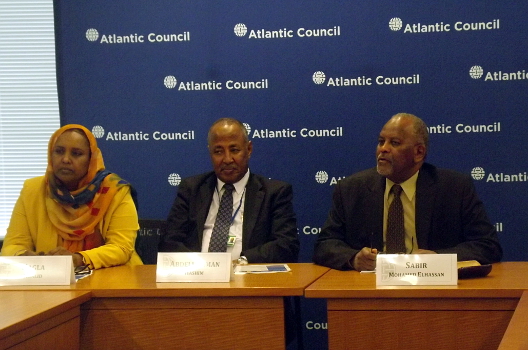 The issue of debt relief has for years been a point of contention in Sudan’s relationship with much of the international community, including at times with South Sudan. But its fair and timely resolution would do much to advance the United States’ stated goal of normalizing relations with Sudan.

Dr. Sabir provided history and overview of Sudan’s debt and prospects for relief. He noted that despite recent economic and political efforts made by the Sudanese government, the country still suffers from an unstable economy, which he accredited to a lack of support from the international community. Further, both the large amount of debt held by Sudan and current sanctions in place are holding Sudan back from economic prosperity, he said.

Sudan’s external debt stood at $43.5 billion at the end of last year, representing 79 percent of Sudan’s GDP, according to Dr. Sabir. Effectively cut off from international financing schemes due to both its debt and international sanctions, Sudan has little opportunity to borrow. Moreover, the majority of the country’s debt dates back to its separation with South Sudan, after which Sudan temporarily retained all debt from the former Sudan.

During the discussion, participants agreed on the vital role of the United States in a successful debt relief proposal, but noted the difficulty of reaching a debt relief agreement without addressing the complex set of sanctions the United States has imposed on Sudan, which not only touch on economics, but also political and human rights concerns.

Also in attendance and participating in the discussion was the Honorable Princeton Lyman, Senior Adviser to the President at the United States Institute of Peace and former US Special Envoy for Sudan and South Sudan, and Dr. Paatii Ofosu-Amaah, Facilitator of the African Union-led Tripartite Committee for the Joint Approach to the International Community.