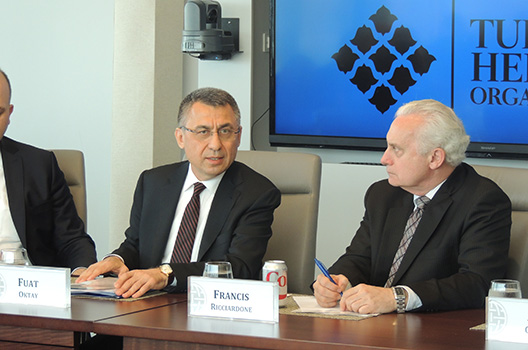 Since the Syrian conflict descended into a ruthless civil war, the world is witnessing the largest humanitarian catastrophe since World War II. As fighting has intensified, it has displaced almost half of the Syrian population and left more than two hundred thousand dead.

In response to the unprecedented humanitarian crisis, Syria’s neighbors have borne the brunt of the influx of refugees fleeing the country. Turkey in particular has expended significant resources to manage the large influx of Syrian refugees. As of April 2015, Turkey has biometrically registered 1.8 million Syrian refugees. Nearly a quarter million of them are in the country’s twenty-five camps, while the rest are dispersed across cities and towns. Dr. Oktay oversees the infrastructure and logistics for these “camp cities” where AFAD has invested in several initiatives to improve understanding between refugees and the local population. AFAD has also facilitated free health care and education, with a special focus on empowering Syrian refugees. They currently offer cash cards and are considering the possibility of issuing work permits.

Dr. Oktay expressed appreciation for the international acknowledgments of the Turkish efforts, but stressed that Turkey is not receiving enough support from the international community to effectively handle the refugee situation. He added that the Turkish government and international NGOs lack the necessary funding, with the Turkish government spending $5.5 billion so far. He also called on the West, especially European countries, to increase their support of Syrian refugees, especially in terms of resettlement. While Dr. Oktay emphasized the Turkish tradition of hosting refugees as “guests,” he emphasized that the Syrian refugee crisis is not just a regional issue but an international one in which major world powers should take more responsibility.