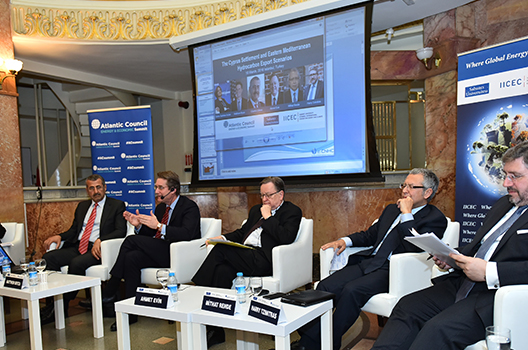 2016 could be a defining year for the Eastern Mediterranean. Talks on the reunification of Cyprus and the recent major discovery of the Zohr field in Egyptian waters could shake up existing gas exploration and export plans across the region. Meanwhile, global gas market developments and a low price environment promise significant challenges to upstream projects everywhere.

On March 18, the Atlantic Council’s Turkey office hosted a panel discussion in Istanbul in cooperation with Sabanci University’s Istanbul International Centre for Energy and Climate (IICEC) to explore the latest political and market developments related to Eastern Mediterranean hydrocarbon resources and Cyprus reunification.

The panelists agreed that global gas developments and the low price environment present a significant challenge to upstream energy projects worldwide, including the Eastern Mediterranean. However, more pressing in the Eastern Mediterranean is a resolution to the conflict in Cyprus. The success of resource exploitation is dependent upon a resolution of the conflict. According to Mr. Ellinas, without a solution to the Cyprus issue, exports from Aphrodite or Leviathan may have to be accomplished through floating liquefied natural gas (FLNG) or floating compresses natural gas (FCNG) and would be delayed into the 2020s.

Ambassador Rende emphasized that recent gas discoveries in the Eastern Mediterranean will present an opportunity to achieve peace, regional cooperation, and prosperity. Ambassador Bryza elaborated, “if Israel and Cyprus can agree to resolve Israel’s claim of nine percent of the Aphrodite field via joint development of that field, this could set a precedent for Turkey and Cyprus to reach an analogous agreement, when the time is ripe in the context of negotiations on a Cyprus settlement. Such an agreement could, in theory, help UN-brokered talks transform a potential preliminary accord on the outlines of a Cyprus agreement into a final and comprehensive settlement.”

As exciting as the opportunities for cooperation in the Eastern Mediterranean are, the logistical and political obstacles are daunting. In addition to the low oil price environment, the region faces difficulties related to technology, exploration, exploitation, regulation, and access to energy markets. Dr. Tzimitras argued that despite the current atmosphere of shared political will in finding a settlement, education in both communities has failed to combat enmity and build bridges. Instead, the divide between Greek and Turkish Cypriots has been allowed to widen.

Mr. Ellinas stressed that politics alone will not make projects happen; the private sector will only invest in low risk and commercially viable projects. It was generally agreed that the best and most commercial solution for hydrocarbon exports from the Eastern Mediterranean would be a pipeline from Israel to Turkey with Cyprus gas included, but this requires settlement of the Cyprus problem. Ambassador Bryza, on the other hand, opined that if UN-brokered talks achieve a breakthrough, but not yet a comprehensive Cyprus settlement (e.g, agreement on the basic principles of a comprehensive settlement but with some details still to be settled), natural gas exports from Cyprus and Israel to Turkey could provide a major confidence-building measure as the parties then work to transform the basic principles into a final settlement.

The panelists agreed that the parliamentary elections in Cyprus this May are slowing the negotiation process but that the climate will become clearer after May. Optimistically, Dr. Evin pointed out that it was the first time since Cyprus gained independence that the leaders of both the Greek and Turkish communities appeared equally interested in reunification. However, he warned, the talks remain delicate, not least because of the uncertainty of public support, especially among Greek Cypriots.

Taking a different perspective on the atmosphere in Cyprus, Ambassador Rende believes there is a positive climate in the island and that the two sides have entered into a stage of intensified negotiations. He stated all relevant parties should place sincere efforts on the process in the interest of the two peoples and the region as a whole. Ambassador Rende underscored that if there is political will on all sides, a settlement could be possible in the near future. Ambassador Rende further emphasized that the Cyprus problem is not an issue of “invasion” or “occupation” but an issue of creating a partnership between the co-owners of the island.

Reunification will happen in one of two ways according to Mr. Ellinas. The first is with regards to the veto and requires Turkey’s recognition of Cyprus and the opening up of its ports and airports followed by Cyprus lifting its veto. The second option is a ‘grand-settlement’ agreement i.e., first the parties will agree on a settlement, the new federal state will be recognized, and then Cyprus will lift its veto, also paving the way for a comprehensive agreement between EU and Turkey on accession and refugees – he says this second option can be reached by autumn 2016.

In regards to Israel, Ambassador Bryza underlined that Egypt’s Zohr natural gas discovery will be used for domestic purposes, while gas imported from elsewhere may be exported from Egypt’s under-utilized LNG terminals, thus creating a potential export route for Leviathan gas.

Ambassador Bryza expanded, “the economics of the Egypt route, however, are poor. The economics of exports to Turkey are significantly better, since Leviathan gas can fetch a higher price in Turkey than in other regional markets, but at a level that is still lower than what Turkey pays for gas from Russia and Iran.”

Turkey, being geographically best positioned, one of the largest and fast growing energy markets, and a strategic player in the Southern Gas Corridor, would be the ideal destination for Israeli gas and that this also conforms to Turkey’s interest in diversifying its energy resources. Whether Israeli politics and law allow for integrated energy relations with Turkey remains to be seen and stands as a separate geopolitical conflict from any resolution in Cyprus.

Dr. Evin advised caution in the midst of much speculation on the possibility of positive change in the Eastern Mediterranean. The limited quantities of natural gas, particularly in Cyprus, are unlikely to make it a game changer. He emphasized the need to decouple the issue of Cyprus reunification talks from that of hydrocarbons in order to avoid possible negative repercussions against perceived external pressures to influence the talks. If political differences are allowed to supersede concerns of economic and energy security this region could find itself unable to utilize the resources it has.