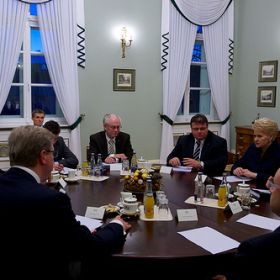 To discuss the challenges that remain for European leaders in continuing to develop the relationship with the eastern partners after Vilnius, and to articulate a vision for transatlantic cooperation on the Eastern Partnership going forward, the Atlantic Council’s Transatlantic Relations Program hosted a members’ conference call with H.E. Linas Linkevičius, minister of foreign affairs of the Republic of Lithuania during the Lithuanian Presidency of the Council of the European Union. The call was moderated by Atlantic Council Executive Vice President Damon Wilson.

The European Union’s Eastern Partnership Summit in Vilnius on November 28 and 29, 2013 resulted in a mixed bag of successes and disappointments. While Moldova and Georgia resisted pressure from Moscow and initialed agreements that signaled a willingness to move closer to the European Union, Ukraine and Armenia rejected further European integration. Following the summit, hundreds of thousands of Ukrainians have taken part in pro-Europe protests on the streets of Kiev and other cities to demonstrate their anger at Ukrainian President Yanukovych’s decision.

Minister Linkevičius provided an inside account of the Vilnius Summit, including what he considers to be the most important outcomes of the negotiations—the positive steps taken by Moldova and Georgia, and the success of the summit in bringing together journalists, NGO representatives, and leaders from nearly all European countries to shed light on the Eastern Partnership. The minister emphasized his belief in the future of the Eastern Partnership, but cautioned that pressure from outside actors on the eastern partners will no doubt increase as time passes.

Minister Linkevičius argued that the European Union would be naïve to underestimate the power of Russian influence on the eastern partner countries. To do so would allow Russia a “free pass” in the region. This scenario is one in which a “wait and see approach” will almost certainly end in an unfavorable outcome for the European Union, according to the minister. Furthermore, European unity on Eastern Partnership policy will be of seminal importance moving forward. Without a united European voice, Minister Linkevičius suggested that continued efforts at integration will likely encounter additional roadblocks.

Minister Linkevičius concluded with the conviction that despite the challenges, there is hope for the Eastern Partnership. The combined visit of EU foreign policy chief Catherine Ashton and US Assistant Secretary of State for European and Eurasian Affairs Victoria Nuland to Ukraine this week bodes well for transatlantic cooperation on Eastern Partnership issues. Upcoming meetings of the European Union next week will focus on how the European Union can respond to Russian pressure in the region, and Lithuania will continue to play its role in ensuring that the Eastern Partnership stays in place as a priority for the European agenda. The Vilnius Summit laid the groundwork for a major step forward in Eastern Europe. With the support of the United States, the European Union remains committed to bringing its eastern neighbors closer to Europe in order to ensure a politically and economically stable region for years to come.