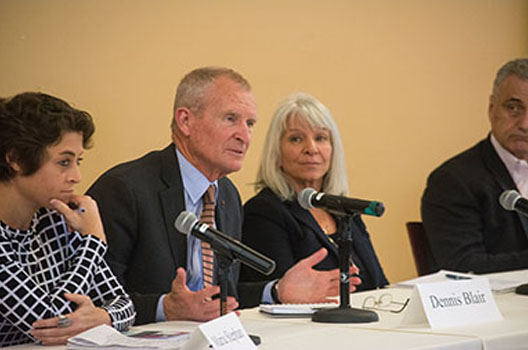 On April 29 2016, The Fletcher School and the Atlantic Council hosted the inaugural conference on resurgent authoritarianism which brought the security and democratic development communities together to discuss combatting corrupt authoritarian regimes in pivotal regions where the U.S. has national security interests.

Professor Richard Shultz opened the proceedings by providing background on the decade long democratic recession in countries like Egypt, Nigeria, Pakistan and Russia and the hazards that have accompanied it. According to Shultz, this kind of recession has not only facilitated extremism but also destabilized neighboring countries and their respective regions at large.

Following Shultz’s opening remarks, the first panel consisted of a keynote conversation between the following: former Director of National Intelligence Dennis Blair, Chair of the International Center on Nonviolent Conflict Peter Ackerman, and Special Advisor on Violent Extremism, Conflict and Fragility at the U.S. Institute of Peace Beth Cole.

Panelists highlighted the issues of resurgent authoritarianism and the role of the United States in democratic development, which included its tools to encourage democracy in fragile regions, such as diplomatic engagement, private sector assistance and military engagement.

Dr. Maria Stephan (F02, F05), moderator of the panel, called authoritarianism “a serious problem,” but asserted that “we have the tools to do something about it…. tools to help empower civil society and other local drivers of democracy.”

Ackerman emphasized the use of civil resistance as a tool for democratic development. He believes the utilization of civil resistance creates disruption that eventually leads to defection, resulting in a safer method of communication and pressure on authoritarian regimes to reform.

In addition, Stephan cited the importance of engaging with the security sector when discussing democratic development.

“The security sector and security actors are critical components of any society, and when talking about democratic development, if you’re not bringing the security community into the conversation, you’re sort of missing the boat,” she said.

Admiral Dennis Blair touched on how authoritarian governments are using democratic ideas and processes for their interests. In these cases, the military has become a special interest group that regimes control through a combination of “carrots and sticks” to enable them to support the regime. Admiral Blair also criticized the abuse of the military and called for a “democratic transition” to increase governmental control over armies: “Governments need to chip away at the armies excessive privileges while strengthening the roles and image of the armed forces.”

The panelists also urged the defense sector to move away from solely training and equipping security actors to building institutions. Beth Cole echoed these sentiments and advised all stakeholders to be involved in the institutional aspects of defense sector reform, citing that regime change should also occur in institutional terms as well. Beyond defense institution building, Cole also called on the U.S. to establish incentives for the respective militaries it is working with to meet the populations they are supposed to protect.

Through a critical but optimistic lens, the 2016 panelists of the inaugural conference on resurgent authoritarianism offered significant insight into both short term and long term solutions. With unified world security and development sectors, change is certainly possible over time for regions dealing with decade long democratic recessions if the suggested measures are taken.

The conference was part of a partnership established by The Fletcher School and Atlantic Council in July 2015. These two organizations are working together to tackle a full range of substantive issue areas through a number of endeavors including joint programs, co-hosted conferences and workshops, among other activities.